Freezing cold air is expected to sweep over the UK from a northerly direction over the coming weeks, bringing wintry conditions, including snow, with it. The cold front is likely to be caused by high pressure dominating the weather system for northern Europe in early March, which could push cold air into the UK. BBC Weather’s long-range forecast between Monday, February 22 and Sunday, March 7, warned bitterly cold air could linger until next month.

The forecast said: “Towards the end of February and into the first week of March, the forecast becomes trickier to pin down.

“There are a lot of signals from teleconnections (large-scale atmospheric patterns that can influence UK weather from afar) that we may see a return of a colder, drier pattern as high pressure edges back into northern Europe.

“One such pattern is called the Arctic Oscillation, or AO for short, and it is currently strongly negative.

“This means that there is higher pressure than normal over the Arctic ice cap. 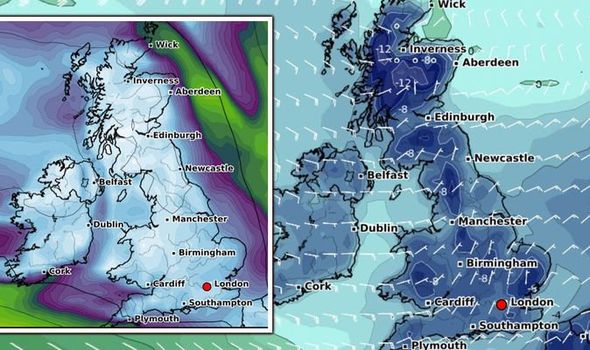 “Historically, when this pattern has occurred in January and early February, it continues to dominate through to early March.

“In short, cold and dry weather is expected to return and persist into March as Arctic high pressure dominates our weather patterns.”

The Met Office added snow showers could blitz eastern parts of the UK in March.

The forecast between Thursday, February 25 and Thursday, March 11 said: “Into late February there is a signal for higher than average pressure to expand westwards leading to an increased chance of snow showers redeveloping in the east, for conditions in the north to become generally quite settled and for unsettled weather in the south, with disruptive snow possible.

“A similar picture continues into March, though milder conditions in the west look more likely to spread northwards.”

“Some showers wintry in places. Less cold or milder particularly in the West and South, but colder and perhaps brighter further North and East with more frosts. 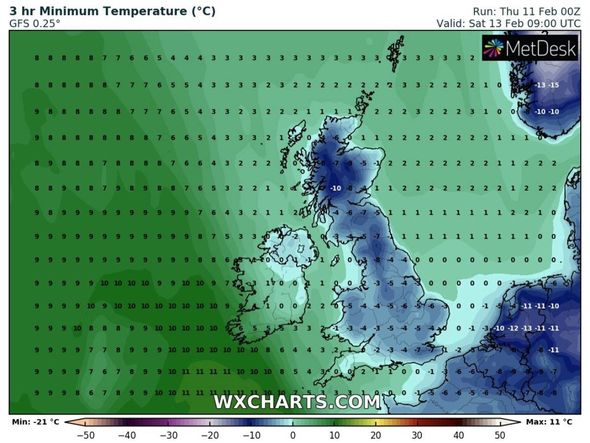 “Probably turning more generally colder later, with wintry showers especially in the East. Wetter in West and South, drier in North and East.

“A bitterly cold spell possible, with penetrating frost and some snow especially in East.

“A quieter interval may follow giving sunny spells, but with sharp overnight frost and patchy fog. Then two possibilities. Turning milder and showery as gusty Atlantic westerlies return, but perhaps colder again in North by month-end.

“Or an East/West split, with the East remaining cold but drier, while further West it’s somewhat milder and breezier but unsettled.” 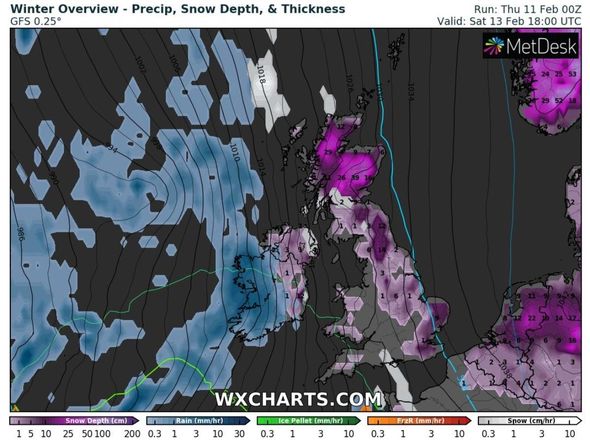 It comes as the UK has been battling record-breaking freezing lows this week as the cold air grips the country.

Last night, Braemar, Aberdeenshire, recorded a staggering temperature of -23C, the lowest February temperature in the UK since 1955.

The Met Office also has scattered yellow weather warnings in place for parts of Scotland and northern England until Saturday.

Oli Claydon, a spokesman for the Met Office, said: “There’s still a couple of days of cold conditions to get through and a little bit more snow in parts of Scotland but the trend is that the weekend is going to herald a change to milder conditions.” 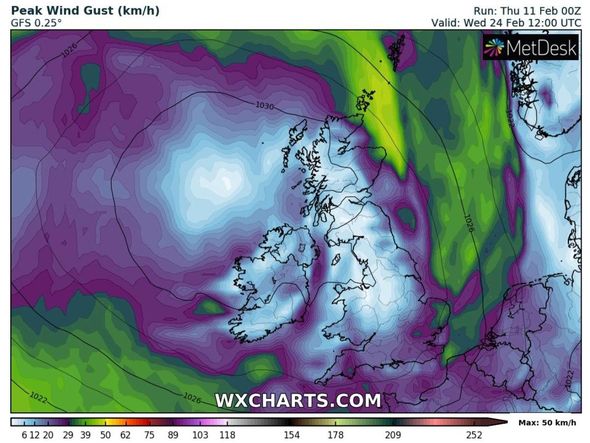 He added that there was still a chance of freezing rain on Sunday and said the Met Office may issue a warning for ice, which would bring “significant hazards”.

Western Scotland, including Portree and Fort William, could experience bitter lows of -11C on Saturday, February 13, the latest temperature models from WXCHARTS show.

On the same day, northern regions of England may also shiver as lows of -5C hit Newcastle and Scarborough in the northeast, while Carlisle in the northwest is hit with -7C.

The Lake District could see -8C on Saturday, with other parts of Yorkshire including Leeds seeing -6C.

Further south, London is forecast to be hit with -4C and Kent could see a bitter -7C.