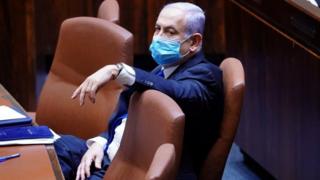 Israel has sworn in a unity government after the longest political crisis in the country’s history, and amid the coronavirus pandemic.

Under a power-sharing deal agreed in April, right-wing PM Benjamin Netanyahu will serve for another 18 months.

His centrist rival Benny Gantz will serve as deputy PM, before taking over.

The two politicians have agreed to press ahead with a controversial plan to annex part of the occupied West Bank area as early as 1 July.

Palestinian leaders reject the legitimacy of the move.

Mr Netanyahu, who leads the Likud party, and Mr Gantz of the Blue and White party, have also said the new government’s priority will be tackling the economic crisis caused by the coronavirus pandemic.

The power-sharing agreement ends more than a year of political deadlock in which three elections were held but failed to yield an agreement.

The formation of the new government comes days before Mr Netanyahu will go on trial on bribery and fraud charges – a first for a sitting prime minister in Israel. He denies any wrongdoing.

What’s the latest from Israel?

On Sunday, Mr Netanyahu presented his new government in Israel’s parliament, the Knesset. “The public wants a unity government, and that’s what the public is getting today,” he said at the start of the session in Jerusalem.

On the issue of Jewish settlements in the West Bank, Mr Netanyahu said: “It’s time to apply the Israeli law, and write another glorious chapter in the history of Zionism.”

His plan falls in line with US President Donald Trump’s “vision for peace” between Israel and the Palestinians, which was unveiled in January. Mr Trump’s plan also envisages a Palestinian state in about 70% of the West Bank, all of Gaza, and with its capital on the fringes of East Jerusalem. 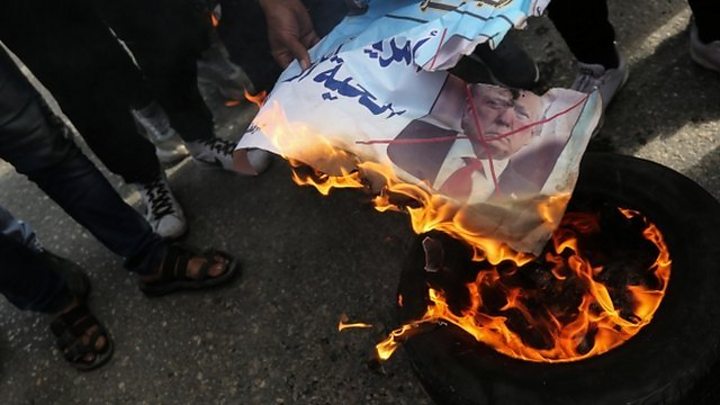 The Palestinians – who claim all of the West Bank, Gaza and East Jerusalem – have rejected the plan, dismissing it as biased towards Israel and a denial of their rights.

Israel has occupied the territories since the 1967 Middle East war. More than 600,000 Jews live in about 140 settlements in the West Bank and East Jerusalem. Most of the international community considers the settlements illegal under international law, though Israel disputes this.

What was agreed in the power-sharing deal?

The unity government – a rarity in Israel – was agreed upon after neither Mr Netanyahu nor Mr Gantz managed to form governing coalitions after a record three elections in just under a year. Mr Gantz, a former military chief of staff, had initially vowed never to join a government led by Mr Netanyahu because the latter faces criminal charges.

But with the advent of the coronavirus crisis, Mr Gantz changed his position, saying an emergency national unity government was needed as these were “not normal times”. The move led to the disintegration of the centre-left alliance of parties which supported Blue and White, with erstwhile colleagues accusing Mr Gantz of selling out.

Mr Netanyahu has been charged with bribery, fraud and breach of trust in connection with three separate cases. He is alleged to have accepted gifts from wealthy businessmen and dispensed favours to try to get more positive press coverage.

Mr Netanyahu says he is the victim of a political witch-hunt.

‘A feeling of emergency’

In the time of Covid-19, Israel’s Knesset looks different as lawmakers sit apart wearing masks, but some things remain the same.

Benjamin Netanyahu is still prime minister after striking a coalition deal with his main rival, Benny Gantz, to end an unprecedented year of political deadlock.

“The coronavirus certainly played a role by creating a feeling of emergency, a feeling that the arguments between the pro-Netanyahu and anti-Netanyahu camps needed to be put aside in favour of setting up a unity government.”

Some Israelis are outraged that a sitting prime minister is to go on trial for serious criminal charges. They’ve joined large protests. But others are glad to have a tested leader in charge during this pandemic.

“I’m happy to have a government,” says Carmi, a mother in Jerusalem. “Education and business, I guess that’s all it needs to take care of right now.”