And, while Israel offocially downplayed the risk, one government source admitted the replacement of political protest with “fighting on purely religious lines” was a departure from fighting in 2014 and “a concern”. Hady Amr, a mid-level US diplomat, will take part in talks with Israeli, Palestinian and UN officials ahead of a UN Security Council meeting, though there was scepticism over whether the US could achieve its aim of a “sustainable calm”.

“The problem is that every international actor has had their fingers burned in the past. No one is seen as a neutral and honest broker,” said middle east expert Prof Gareth Stansfield of the Council of Geostrategy think tank.

At least 139 people have been killed in Gaza and ten in Israel since the fighting began on Monday, with hundreds injured on both sides.

On Saturday  Gaza found a five-month-old baby alive in the rubble of a refugee camp hit by Israel rockets which killed 10 people. The baby was found alongside its dead mother.

Later the IDF gave workers in the AlJallah tower block in Gaza, which housed al Jazeera and AP bureaus, just an hour’s notice to evacuate before obliterating it in an air strike, claiming it contained Hamas military intelligence assets.

Rockets had reportedly been fired from underneath the building. 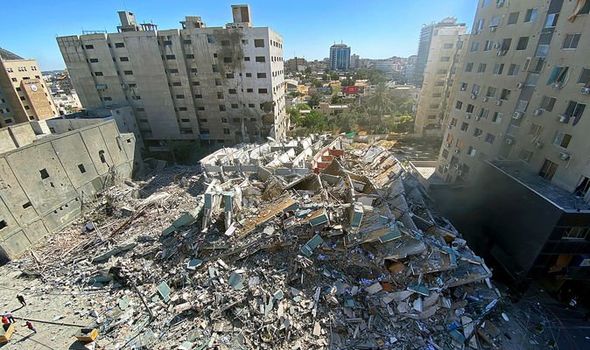 “The building contained civilian media offices, which Hamas hides behind and deliberately uses as human shields,” said an IDF spokesman.

In Israel a 55-year-old man was killed and more than 40 injured by shrapnel, most on their way to bomb shelters.

The disparity in deaths is due to population density in Gaza and Israel’s “Iron Dome” anti-missile system, which has been firing hundreds of £60,000 Tamir missiles to intercept the barrage from Hamas.

With more than 2,000 incoming missiles fired so far, however, the system is at best only 80 per cent effective.

“The sirens just started blaring and there wasn’t any shelter there so we ran to the closest car park and looked up and there were 10 rockets above us,” said mother -of-three Shashi, who lives in Bat Yam, a coastal city near Tel Aviv.

“My youngest child is really shaken up. We are all fleeing in terror. 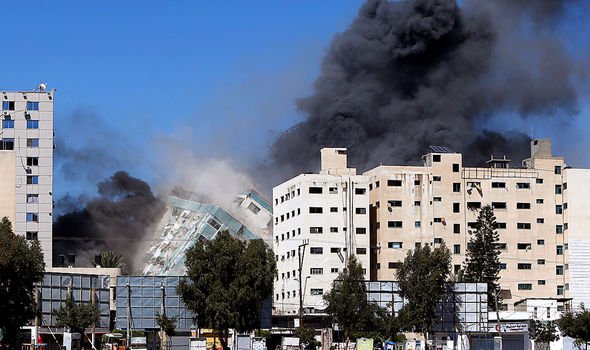 “Whether you’re a mother in Gaza or Tel Aviv, we are all mothers running to safety. Who can live like this? Who?”

Fighting was triggered on Monday after days of mounting tensions by Hamas’ request for Israel to remove police from the holy Temple Mount / Haram al-Sharif and Arab district of Sheikh Jarrah, where Palestinian families face eviction by Jewish settlers.

However, it also coincided with the end of Ramadan and the national Israeli celebrations marking the anniversary of Jerusalem Day, when Israel established control over the Old City in the aftermath of the June 1967 Six-Day War.

With both sides showing little willingness to de-escalate, the UN Security Council session is not expected to provide a major breakthrough.

However, sources close to the Qatar government last night said they were more hopeful about the Gulf state’s chances of “meaningful intervention. 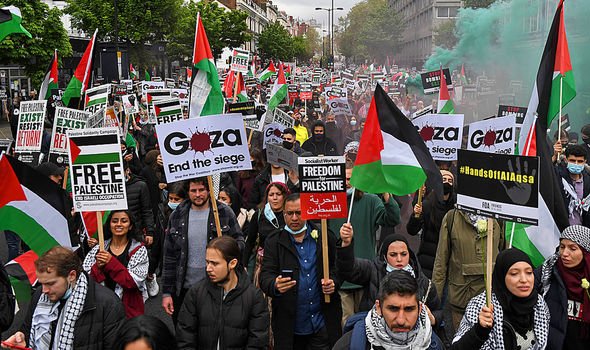 Qatar did not sign up to former US President Donald Trump’s Abraham Accords which normalised relations between Saudi Arabia, the UAE and Israel and gives millions in humanitarian relief to Palestinians with Israel’s consent.

The Gulf state recently brokered peace talks with the Taliban in  Afghanistan and is rumoured to be about to announce a breakthrough in Yemen.

But Prof Stansfield was less optimistic, however.

“We’re seeing an acknowledgement that the peace process is over. The hope that you can find a resolution in a two state solution, hope of finding a negotiated settlement between Palestine and Israel is no longer part of the landscape,” he said.

While rocket strikes remain Tel Aviv’s most urgent concern, the spiralling of sectionalist fighting between Arab and Jew within Israel itself caused some experts to predict that a ceasefire would not leave Israel with bigger problems. 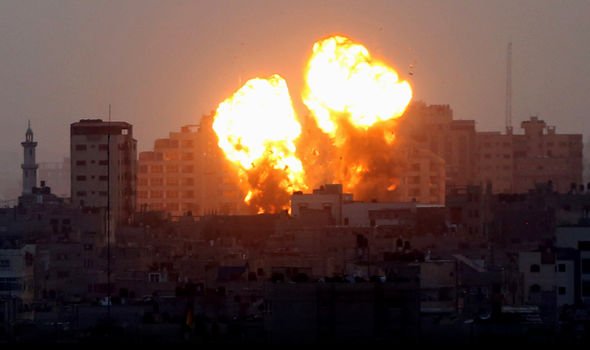 “In the last few days we have seen extremists going through Haifa. A few days ago there were some people from the local council and local business owners  telling us hooligans are coming to riot in the neighbourhood,’ said Shahin Nassar, a resident of Haifa and a Palestinian journalist.

“We gathered locals to protect our neighbours from any rioters.  We clashed with the police, and things got out of control.

“This is pure fear, something we never experienced before between Jews and Arabs in neighbourhoods of coexistence. Something has been damaged  between the relationships between Arabs and Jews.”

Prof Stansfield added: “The situation has metastasised into an enduring and perennial conflict.

“My concern is that talk about civil war between Palestinians and Israelis is actually more credible than some other analysts are making out.”