A ceasefire between Israel and Hamas is continuing to hold, allowing the first aid convoys to reach Gaza.

The truce, which began before dawn on Friday, is allowing both sides to assess the damage following 11 days of conflict in which Israel pounded Gaza with airstrikes and militants fired thousands of rockets at Israel.

Gaza medical officials said 248 Palestinians – including 66 children – were killed, while the latest death toll in Israel is 13, according to Reuters news agency. 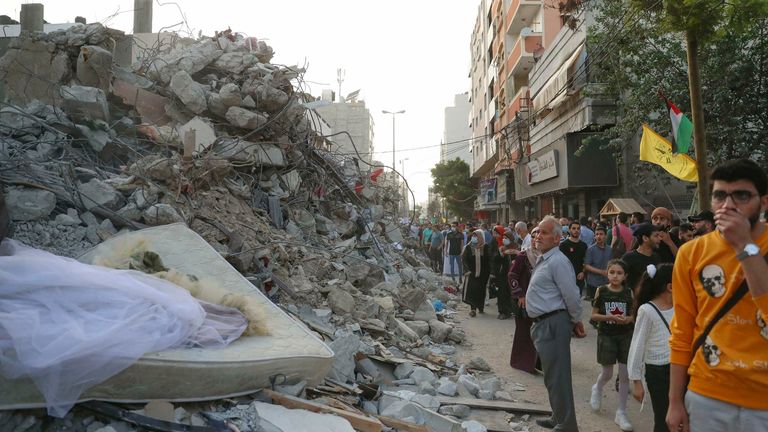 The damage in the densely populated Palestinian enclave has sparked humanitarian concerns, with reconstruction costs estimated at tens of millions of pounds.

In Israel, where some communities had to seek refuge in bomb shelters because of the bombardment, economists have warned the recovery from the pandemic could be set back.

Despite confrontations between Israeli police and Palestinian protesters at Al-Aqsa mosque in Jerusalem on Friday, there were no reports of Hamas rockets or Israeli military strikes on Saturday morning.

The halt to hostilities has enabled aid agencies to start taking supplies of medicine, food and fuel to Gaza after the Israelis opened a crossing.

Since the ceasefire, the United Nations has sent 13 trucks with food, COVID vaccines and other medical supplies, with $18.6m (£13.1m) in emergency humanitarian aid allocated to the region.

Meanwhile, US President Joe Biden has said a two-state solution is the only answer to resolving the conflict between Israel and the Palestinian people.

The US administration worked in the background, along with Egypt, to secure an end to the conflict. Mr Biden has said the US will work with the internationally recognised Palestinian Authority, and not Hamas, in order to provide humanitarian aid.

Israeli Prime Minister Benjamin Netanyahu has threatened a “new level of force” if Hamas – regarded by many countries as a terror organisation – launches any attacks following the ceasefire.

“If Hamas thinks we will tolerate a drizzle of rockets, it is wrong,” he warned. Mr Biden, speaking at the White House, added: “Let’s get something straight here: until the region says unequivocally they acknowledge the right of Israel to exist as an independent Jewish state, there will be no peace.

“I’m praying this ceasefire will hold. I take Bibi [Benjamin] Netanyahu – when he gives me his word – I take him at his word. He’s never broken his word to me.”

The 11 days of fighting were the worst seen in the region since 2014.

Hamas and other militant groups fired more than 4,000 rockets at Israeli cities, with Israel conducting hundreds of airstrikes.

Gaza’s housing ministry says nearly 17,000 residential and commercial units have been damaged or destroyed by the Israeli strikes.

Around 800,000 people also do not have regular access to clean water, according to the UN, while the power network has also been badly affected. Meanwhile, thousands of protesters gathered in central London on Saturday to support the Palestinian cause.

A crowd blocked traffic near Victoria Embankment as people waved flags and chanted on their way to Hyde Park.

During the march, chants of “Israel is a terrorist state” and “we are all Palestinians” could be heard across the capital, while protesters scaled bus stops and lampposts. The demonstration has been described as being largely peaceful, however there were some reports of people throwing objects at the police and attempting to split the crowd.

Among the groups in attendance were branches of the National Education Union, the Palestine Solidarity Campaign and Stop The War Coalition.