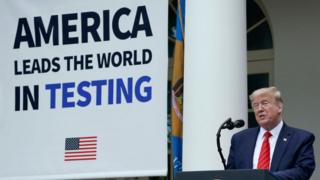 President Trump has been praising the testing programme in the United States, an issue over which his administration has faced significant criticism.

We’ve been checking out some of the claims he’s made about it.

“We’re testing more people per capita than South Korea, the UK, France, Japan, Sweden, Finland and many other countries.”

President Trump said this on 11 May.

The US has ramped up its testing significantly, and has carried out more tests in total than any other single country.

But it still lags behind some in terms of testing per capita – that is, as a proportion of its population.

Exact testing comparisons can be difficult as countries count testing in different ways.

But looking at the data as of 11 May, the US carried out about one test for every 35 people, and was roughly on a level with Italy.

But it was behind Spain (which had tested about one in every 29 people) as well as Russia and Australia.

There are also a number of smaller countries around the world which have very high testing rates per capita.

However, President Trump chose his list of countries carefully and was correct to say that the US was ahead of South Korea, France, Japan, Sweden, the UK and Finland (as of 11 May).

“We have tested more than all countries put together.”

President Trump has repeatedly said the US has carried out more tests than every other country in the world combined.

It’s true that this is more tests than any other single country.

However, it’s nowhere near as many as the rest of the world combined.

Just adding together the testing totals on 12 May for Germany, Russia and the UK gives you more than the those carried out in the US.

“We had old-fashioned tests that didn’t work – they were really obsolete – they didn’t work, they were broken.”

President Trump says his administration had a “broken” test that didn’t work when first testing for the coronavirus.

He has previously said: “We inherited a broken test – the whole thing was broken.”

The US did have faulty tests initially after the White House conceded the first batch sent out by the government’s central health body produced inconclusive results.

However, these tests were introduced in February under the Trump administration so they weren’t inherited or old.

In early March, the White House conceded the US did not have enough testing kits, but since then it has significantly ramped up testing, with the total number increasing six fold since the start of April.

“Millions of tests – and the highest quality test.”

When President Trump talks about the “highest quality” test, it’s not exactly clear what he’s referring to. He has previously said the US tests are “better” than those used in other countries.

However, when it comes to antigen tests – tests that tell you if someone currently has coronavirus – the accuracy tends to be similar across the globe.

The Foundation for Innovative New Diagnostics, an independent evaluator of tests, based in Switzerland, says its results “see equally good performance from companies in multiple countries”.

Antibody tests – which tell you if someone has previously had Covid-19 – have so far proved unreliable and have not been widely rolled out. So, the “millions of tests” must be the antigen ones.

There is no clear evidence that these tests in the US are any better or worse than in any other country.

Send us your questions