Al-Zubeidi was hospitalised for days before succumbing to her wounds, her sister says. 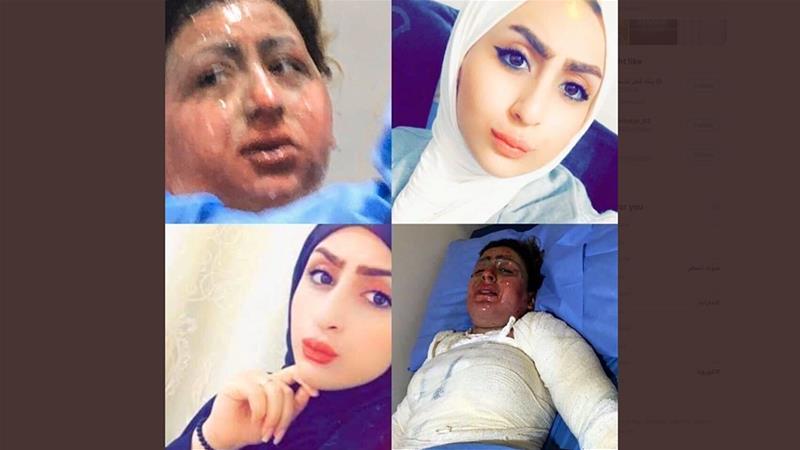 An Iraqi woman has died of severe burn wounds after she was hospitalised in the southern Iraqi city of Najaf following alleged torture by her husband, her family members said.

Local media reported late on Saturday that 20-year-old Malak Haider al-Zubaidi died days after the alleged abuse and being set on fire, in a case that has stirred outrage on social media.

The victim’s sister was quoted as saying by local media that al-Zubaidi passed away, and called for justice to be served.

According to reports, al-Zubaidi died after her lungs and kidneys stopped functioning nearly a week after she was admitted to the hospital.

She was the second wife of Mohammed al-Mayahli who, according to her family, had forbidden her from visiting her parents for some eight months.

Her husband, a police officer, wrote on his Facebook page last week that al-Zubeidi had a mental illness and set herself on fire. Hours later, videos of the young lady were widely shared on social media, showing her screaming in pain of her burn wounds.

“She burned herself with petrol and accused me and my family,” al-Mayahli wrote. “There are sponsored accounts that are posting these lies just to slander my family.”

According to an unverified police report published by Hayan al-Khayat, an Iraqi lawyer, al-Mayahli’s father appears to be an army colonel. Earlier reports quoted activists claiming the family said as sons of an important colonel, the law cannot touch them.

The report claims that on April 8, al-Zubaidi gave an inaccurate statement to an investigative officer after she was “threatened” to report the incident as an accident by her in-laws.

The report adds that she changed her statement on April 11, saying that after engaging in a dispute with her husband, he abused her with a phone charging cable before she ran to the garden in the front of the house. There, al-Zubaidi was soaked in gasoline and then she caught on fire, it says.

Local media reported that Najaf police, on the court’s order, took into custody a number of people believed to be connected to the case, including al-Mayahli and several other members of his family.

There is no law criminalising domestic violence in Iraq, although the country’s constitution bans “all forms of violence and abuse in the family”.

Among those speaking in solidarity with al-Zubaidi is United Kingdom’s ambassador to Iraq, Stephen Hickey.

In a Twitter post published in Arabic, he said: “We feel a great deal of sadness about Malak al-Zubaidi’s case, and we hope the investigation is quickly completed. We would like to remind that domestic violence, whether it is phycological or physical abuse, is a prevailing problem around the world.”