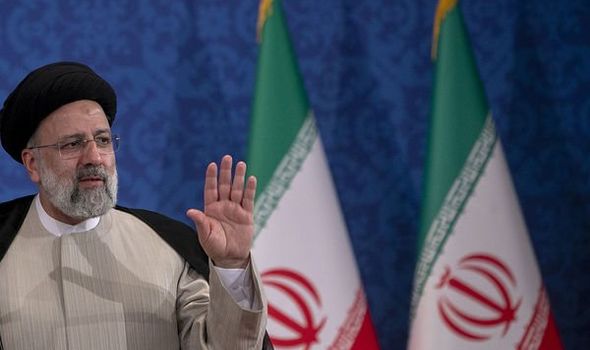 Noury, 60, who was arrested in Sweden in 2019, was then deputy Prosecutor in Gohardasht Prison in Karaj west of Tehran and oversaw executions in several prisons. As such, he took orders from Raisi who then headed Tehran’s  “death commission”, established by Supreme leader Ayatollah Ruhollah Khomeini to exterminate political prisoners languishing in Iranian jails. Last night survivors described their ordeal.

“On August 6, 1988, I was sitting in the ‘death corridor’ in Gohardasht Prison. I remember vividly that Hamid Noury came and grabbed some of my dearest friends, including Qasem Sofiyan, Ali Vasli, Ali Haghverdi, all from the MEK, and took them to be hanged,” said Nassrollah Marandi.

“Their only crime was to remain loyal to the MEK and its struggle for freedom. I never saw them again. But a day has not passed that their memories have not been with me.

“I also remember how on that afternoon, Noury brought a big box of pastries and distributed them among the executioners and the officials involved in the massacre celebrating the executions.

“The first place that he took the pastry box was the room where Ebrahim Raisi, was sitting as a member of the Death Commission and was issuing death sentences.”

Another former political prisoner, Reza Fallahi, added: “I am among many who were eyewitnesses to Noury’s crimes in the corridor of death in Gohardasht prison, where prisoners were lined up to be taken to the execution room. I can never forget those scenes and those moments and never will.

“Noury should be sentenced according to the law, but it is more imperative that the massacre’s masterminds, people like Raisi and Khamenei, are also brought to justice.”

Both men are among 35 survivors giving evidence in next week’s trial in Stockholm.

“Hamid Noury has also himself on some / some occasions attended and participated in the executions.”

The gruelling accounts emerge just days after Raisi, dubbed the “Butcher of Tehran” for his role in the massacre, was sworn in as Iran’s eighth president.

Writing for the Sunday Express today Israeli Ambassador to Britain Tzipi Hotovely condemned the EU for sending a senior diplomat to attend the ceremony.

“In a shameful, puzzling, flattering and unexpected move, the EU sent an official representative to the ceremony. How could such a thing be conceivable?,” she asked.

“I am trying to imagine what went through the head of the EU’s Deputy Secretary-General during the event, when he was pictured sitting next to Hamas, Hezbollah and the Shia militias in Iraq. Are these the people dialogue is possible with? People who torture young mothers and hang homosexuals? Do people really believe such a cruel regime needs to be appeased?”

Last night Shahin Gobadi of opposition group the National Council of Resistance of Iran (NCRI) that includes the People’s Mojahedin Organization of Iran, said: “Khomeini’s fatwa stated that all political prisoners who remain steadfast in their support for the People’s Mojahedin Organization of Iran (PMOI/MEK), should be executed. More than 90 percent of the 30,000 political prisoners who were massacred were from the MEK.

“Many of the Iranian regime’s leaders and senior officials have been implicated in the 1988 massacre. Many of them currently hold key positions, including the current President, Ebrahim Raisi.

“The perpetrators have enjoyed total impunity. This impunity should come to an end. There is not an iota of legitimacy in dealing with a regime presided by a mass murderer such as Raisi.”

“That Ebrahim Raisi has risen to the presidency instead of being investigated for the crimes against humanity is a grim reminder that impunity reigns supreme in Iran,” it said.

“In 2018, our organisation documented how Ebrahim Raisi had been a member of the ‘death commission’ which forcibly disappeared and extrajudicially executed in secret thousands of political dissidents in Evin and Gohardasht prisons near Tehran in 1988.

“The circumstances surrounding the fate of the victims and the whereabouts of their bodies are, to this day, systematically concealed by the Iranian authorities, amounting to ongoing crimes against humanity.”