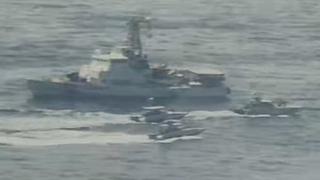 Iran’s Islamic Revolutionary Guard Corps (IRGC) has accused the US of giving a “Hollywood version of events” over an incident in the Gulf this week.

The US said Iranian vessels had conducted “harassing” approaches of six of its ships on Wednesday.

But the IRGC said it had increased patrols in the Gulf after the US Navy blocked the path of an Iranian ship earlier this month.

Tensions rose after the US killed an Iranian general in Iraq in January.

The IRGC’s statement said that US forces had blocked one of its ships in two separate incidents in early April, using “dangerous behaviour while ignoring warnings”.

It added that Iran would respond “decisively” to any miscalculation.

The incident on Wednesday came a day after armed men – believed to have been IRGC personnel – seized a Hong Kong-flagged tanker in the Gulf of Oman and redirected it into Iranian waters before releasing it.

What did the US say happened?

The US Navy accused Iran’s Islamic Revolution Guard Corps (IRGC) of “dangerous and provocative actions” against its vessels, which were involved in a military exercise with US Army Apache attack helicopters in international waters.

Eleven IRGC Navy vessels repeatedly approached of six US Navy and Coast Guard ships at “extremely close range and high speeds on Wednesday”, the US Navy said. One passed within 10 yards (9m) of a Coast Guard cutter.

“The US crews issued multiple warnings via bridge-to-bridge radio, five short blasts from the ships’ horns and long-range acoustic noise maker devices, but received no response from the IRGCN.”

“After approximately one hour, the IRGCN vessels responded to the bridge-to-bridge radio queries, then manoeuvred away from the US ships and opened distance between them,” it added.

The US Navy said such “dangerous and provocative actions increased the risk of miscalculation and collision”, and were not in accordance with international maritime conventions or customs.

What’s happened in the Gulf?

The relationship between the two countries has been fraught for decades. But tensions increased after the US withdrew from a nuclear deal and reimposed sanctions on Tehran.

Last year, Iranian forces seized a British-flagged tanker in retaliation for the seizure of an Iranian tanker by the British territory of Gibraltar. Both vessels were eventually released.

The US also accused Iran of carrying out attacks on six tankers in the Gulf of Oman and launching missiles and drones at two oil facilities in Saudi Arabia. Iran denied any involvement.

Animosity between the two countries rose further in January, when the US killed a top IRGC general in a drone strike in Iraq. Iran responded by launching missiles at Iraqi military bases hosting US forces. 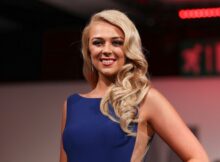 Which president did the best job with inflation? – The Denver Post
Recent Posts
Copyright © 2022 miamiheatnation.com.