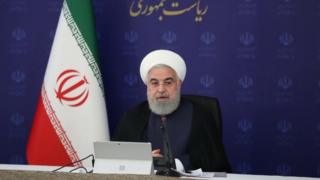 Iran has urged the International Monetary Fund (IMF) to approve a $5bn (£4bn) emergency loan to help fight the coronavirus, as its death toll passed 4,000.

President Hassan Rouhani warned that “there should be no discrimination” in approving requests.

The US reportedly opposes the loan, with officials saying Iran has sufficient funds at its disposal.

President Donald Trump reinstated the US sanctions in 2018 in an attempt to force Iran’s leaders to renegotiate a nuclear deal with world powers, but they have so far refused.

Iran has been the country in the Middle East worst hit by Covid-19 virus, which has infected more than 1.4 million worldwide and claimed 82,000 lives.

On Wednesday, Iran’s health ministry reported the number of people who had tested positive in the country had increased by 1,997 to 67,286, and the death toll had risen by 121 and now stood at 4,003.

Last month, the Central Bank of Iran requested a $5bn loan from the IMF’s Rapid Financing Initiative, an emergency programme set up to help countries faced with sudden shocks such as natural disasters.

The IMF has said it is in talks with officials in Iran to determine its eligibility for the loan.

However, the Wall Street Journal reported on Wednesday that the US – the IMF’s largest shareholder – planned to block the request.

It cited senior Trump administration officials as saying that Iran’s government had billions of dollars in bank accounts still at its disposal, and that the loan might be used to help its economy rather than on combating Covid-19 or fund terrorist operations.

At a cabinet meeting on Wednesday, President Rouhani said ran expected international organisations to “act on their legally binding duties” at a time of crisis.

“We are a member of the International Monetary Fund,” he said. “We made a request for loan from them and if they exercise discrimination between Iran and other countries, it is clear that neither we, nor global public opinion will tolerate that,” he added.

Mr Rouhani also reiterated that the US sanctions on Iran’s economy were restricted its ability to obtain the supplies it needed to combat Covid-19.

“It will go down in history that the While House has been, even before now, a terrorist on economic issues, but now it is a terrorist in matters of medical treatment too.”

“This will be recorded as a historic disgrace,” he added.

On Tuesday, Foreign Minister Mohammad Javad Zarif called on the US to stop preventing Iran selling its oil.

The Trump administration has denied that the sanctions are preventing aid from getting to Iran, saying the US maintains authorisations that allow for the sale of food, agricultural commodities, medicine and medical devices.

It has also noted that Iran refused a US offer of humanitarian assistance and medical supplies.