A desperate relative hoping survivors will be found following a plane crash in Indonesia has urged people to pray for his family as he awaits news.

Irfansyah Riyanto’s mother and father, as well as his sister and her two children, were all on the Sriwijaya Air flight SJ 182 which disappeared on Saturday.

The Boeing 737-500 plane, which was travelling from the capital Jakarta to Pontianak City on the island of Borneo with 62 people on board, last made contact with air traffic controllers at 2.40pm local time (7.40am in the UK).

Indonesia‘s transportation minister Budi Karya Sumadi confirmed on Sunday morning that human remains, pieces of clothing and scraps of metal have since been found between Lancang Island and Laki Island.

Irfansyah was among the dozens of relatives who rushed to Jakarta’s Soekarno Hatta airport to get information following the crash.

On Sunday morning, he said he was still hoping for good news.

“We feel powerless, we can only wait and hope to have any information soon,” he was quoted as saying by the Reuters news agency.

He said his relatives had originally been due to take an earlier flight operated by Sriwijaya’s unit NAM Air and he did not know why that had changed.

His sister Ratih Windania and her two children had been at the end of a three-week holiday and were travelling home.

In December, she posted a picture on a flight with her children.

“I was the one who drove them to the airport, helped with the check-ins and the luggage… I feel like I still can’t believe this and it happened too fast,” Irfansyah said.

In an Instagram post, he urged people to “pray for us”. In a later message on Sunday, he shared more pictures of his family.

Another passenger on the plane was Panca Widiya Nursanti, a Pontianak teacher who had been returning after a holiday in her home town of Tegal in Central Java.

Her husband Rafiq Yusuf Al Idrus recounted the last contact he had with her. 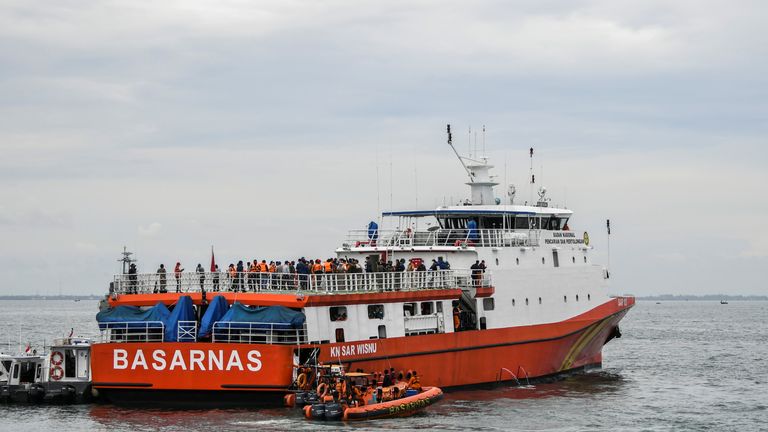 “She contacted me via WhatsApp at 2.05pm with laughter,” he said. “She was already boarding the plane and she said the weather conditions were not good. I said pray a lot, please.”

Indonesian authorities said they had tracked signals likely to have come from the plane’s black boxes on Sunday.

Police have asked families to provide information to help identify any bodies retrieved, such as dental records and DNA samples.

The brother of co-pilot Diego Mamahit told Reuters he had been asked for a blood sample.

“I believe my younger brother survived, these are just for the police procedure,” Chris Mamahit said. “Diego is a good man, we still believe Diego survived.”

President Joko Widodo has offered his sympathies to relatives.

“We are making our best efforts to find and rescue the victims and we all pray that they can be found,” he said.