India declares officials ‘persona non grata’ and both were expected to leave the country within 24 hours. 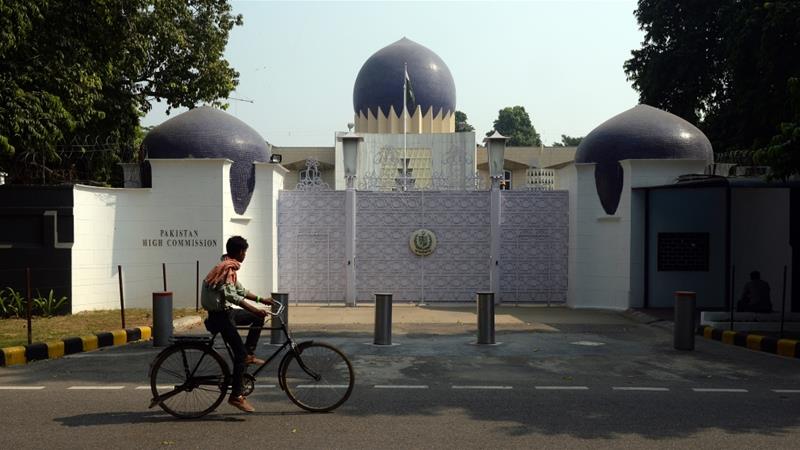 India has expelled two officials working at the Pakistan High Commission in New Delhi after they were held for espionage, the foreign ministry said.

“Two [Pakistani] officials were apprehended on Sunday by Indian law enforcement,” the ministry said in a statement, adding that the Indian government declared them “persona non grata” for indulging in activities incompatible with their status as members of a diplomatic mission.

Both were expected to leave the country within 24 hours.

In Pakistan’s capital, Islamabad, the foreign ministry condemned India’s decision about the expulsion of two of its embassy officials. In a statement, it said the two staff members of the Pakistani High Commission in New Delhi were lifted by Indian authorities Sunday on false and unsubstantiated charges.

“They were, however, released on intervention by the High Commission. We condemn the detention and torture as well as threatening and pressuring of diplomatic officials to accept false charges,” it said.

Pakistan also summoned an Indian diplomat to lodge a strong protest over the move.

India and Pakistan routinely expel each other’s diplomats on spying charges and Pakistan is also expected to respond by expelling Indian High Commission officials in Islamabad in a tit-for-tat action.

India and Pakistan have a long-running dispute over Kashmir, which was split between them in 1947 when they gained independence from the UK.

The South Asian neighbours have fought three wars against each other since independence, including two over Kashmir.

Kashmir has become a bigger source of tension in the relations between the regional powers after New Delhi last year scrapped the Muslim-majority Himalayan region’s semi-autonomous status and imposed a curfew to quell unrest.

Rebel groups in Indian-administered Kashmir have battled for decades for the region’s independence or its merger with Pakistan and enjoy broad popular support.

The fighting has left tens of thousands dead, mostly civilians, since 1989. India has more than 500,000 troops stationed in Kashmir.