Donald Trump says ‘we will be back in some form’

The National Guard is on standby in the US capital with fears the swearing in service for Mr Biden could be a target of violence from supporters of Donald Trump. A dozen troops have even been pulled form their duties after fears they may be sympathetic to action targeting the Democrat.

In a rather different ceremony to usual, there are no crowds for the service, with Mr Biden giving his inaugural address in front of a ‘field of flags’.

Voters have been urged to stay away due to the coronavirus pandemic and the guests to the ceremony have also been reduced in order to abide by social distancing.

One notable absence from the swearing-in service of the 46th President is his predecessor.

President Trump is steering clear of the ceremony and left the White House for the last time this morning.

It is the first time in over 150 years a living US President has not attended the inauguration of their successor.

The Republican has still not congratulated Mr Biden on his election win but did wish the new administration good luck.

In a farewell address released last night, he said: “This week, we inaugurate a new administration and pray for its success in keeping America safe and prosperous.

“We extend our best wishes, and we also want them to have luck – a very important word.” 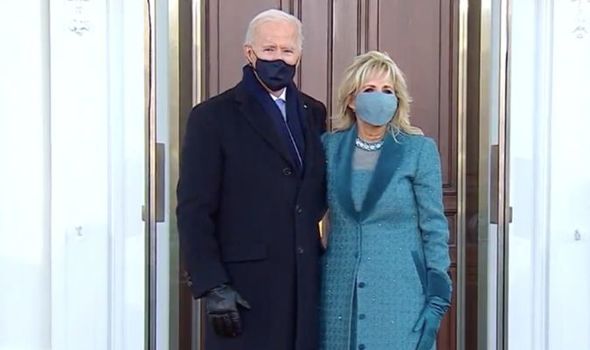 Mr Trump has left Joe Biden a letter in the Oval Office – a long-standing tradition for outcoming presidents.

The letter was confirmed by a White House official although they did not clarify what was written.

Earlier Mr Trump wished Mr Biden well and said he was confident the incoming administration would be successful.

Donald Trump will cast a huge shadow over Mr Biden’s presidency, an expert has warned.

Former ESPN columnist Mr Church, whose book, Tuesday’s Child: How America Chooses Its Presidents, was published by Amberley in November, said: “The scenes on January 6 were shocking and caused the loss of lives.

“Trump still has the capacity to exert considerable influence on the 2024 Republican candidate.”

Joe Biden will sign 15 executive actions after he is sworn in as president on Wednesday, aides have said.

To address the “crises” of the pandemic, the economy, climate change and racial inequity, Mr Biden will sign the executive orders and memorandums in the Oval Office in the afternoon, and ask agencies to take steps in two additional areas, said incoming Press Secretary Jen Psaki.

Mr Trump tells supporters he has no plans of fading away from politics.

He said: “We will be back in some form. So have a good life. We will see you soon.”

Mr Trump warns Joe Biden to “be careful” with the economy, saying it would rise “like a rocket” if he didn’t interfere.

He urged supporters to “think of us” if the economy did succeed under Mr Biden.

1.38pm update: Joe Biden’s plea for unity in the face of civil unrest

Joe Biden has vowed to “restore the soul of America,” and will use his inaugural address to call for the country to come together.

The incoming President is planning to waste no time in getting on with his agenda, tackling the coronavirus crisis as a priority.

He is also planning to overturn a number of controversial Trump administration policies on day one, including scrapping the travel ban on some Muslim-majority countries. 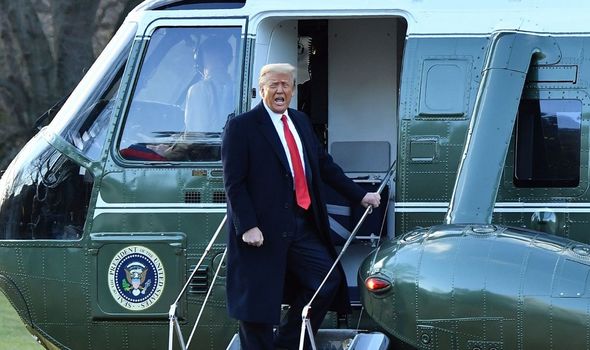 Donald Trump has arrived at Joint Base Andrews where he is giving a goodbye speech.

He has thanked his family, including Melania Trump, who he invited forward to give her own farewell address.

Mr Trump said: “I hope they don’t raise your taxes – if they do I told you so!”

The 45th President hinted he is hoping for a return to the White House as he left.

He said it has been “a great honour” to be President and that he was hoping “it will not be a long goodbye”.

1.20pm update: Trump leaves the White House ahead of the inauguration

Donald Trump has left the White House for the last time.

In front of a crowd of loyal staff, the President and his wife, Melania Trump, walked out onto the lawn and boarded the awaiting Marine One helicopter.

They are being flown to Florida, where Mr Trump intends to rest at his Mar-a-Lago resort.