WASHINGTON/LONDON (Reuters) – America’s biggest oil and gas lobby group is ramping up its advertising spending ahead of the November election to persuade voters that natural gas is a climate-friendly fuel, according to ad buying data. 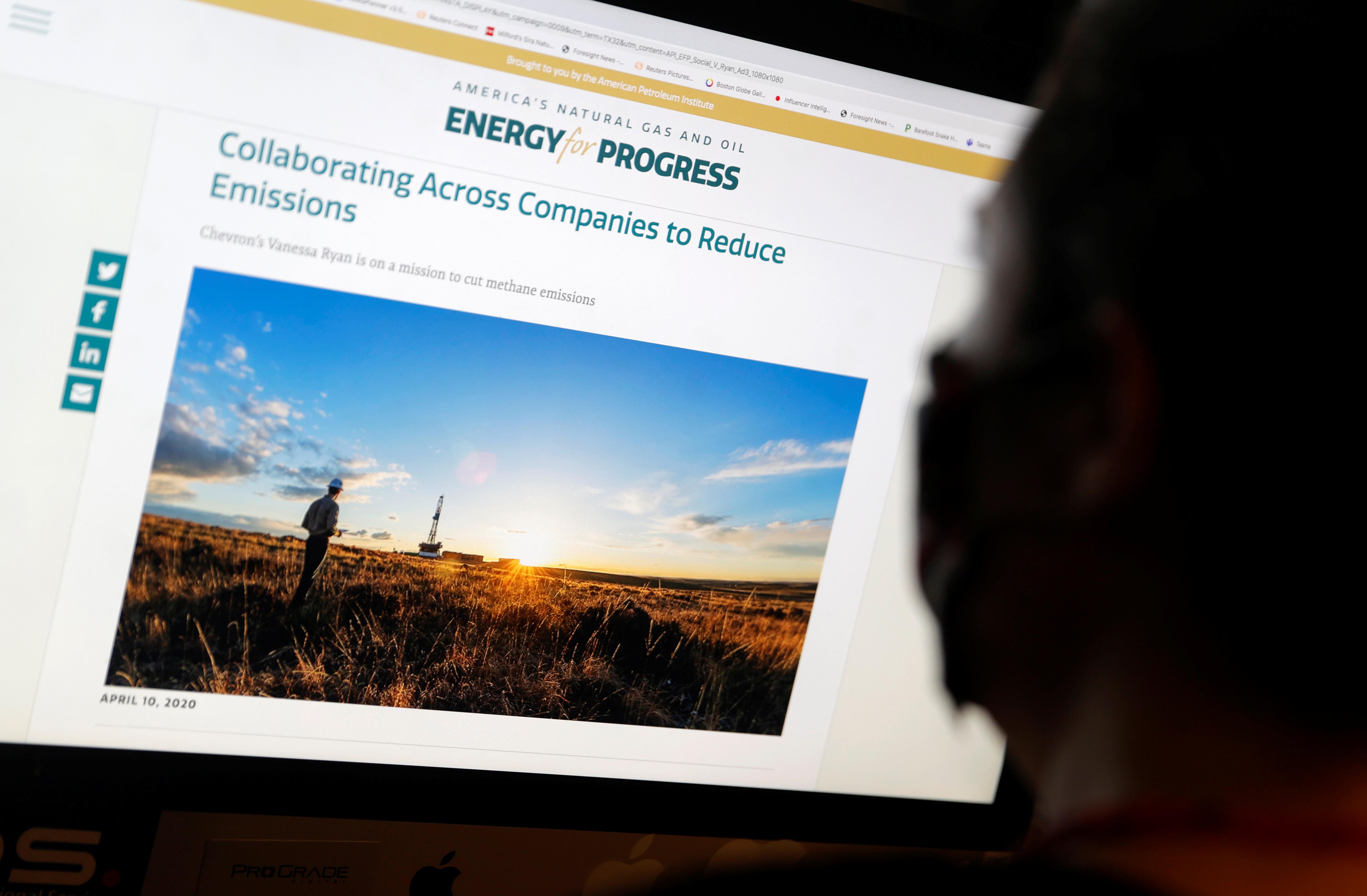 The campaign by the American Petroleum Institute (API), targeted at younger voters and some tight congressional races, is part of a global battle by the drilling industry to assuage growing fears over the role of natural gas in driving climate change.

U.S. Democratic presidential candidate Joe Biden last month unveiled a $2 trillion plan to transition the American economy away from fossil fuels, including natural gas, if he beats incumbent Donald Trump, who is a drilling advocate. Biden’s plan would support climate litigation against polluters who conceal information about environmental and health risks.

In the three weeks following Biden’s climate announcement on July 14, API increased its spending on Facebook ads to an estimated average of $24,000 a day. That’s about six times its average daily spending in the preceding six months, according to an analysis by InfluenceMap, a non-profit group whose data on lobbying is used by institutional investors.

Those ads mainly target a younger audience including 25-to-34-year-olds, according to a separate analysis by Bully Pulpit Interactive Media conducted on behalf of Reuters.

Meanwhile, API has spent an estimated $3.1 million on TV ads between Jan. 1 and Aug. 16, according to data from analytics firm iSpot, an increase of 51% over the same period in 2019.

The TV ads are part of API’s “Energy for Progress” campaign, launched in January. For at least six months, the campaign’s website cast natural gas as a “clean” fuel before that description was revised to “cleaner” on the site sometime in the last two months.

Climate scientists say that natural gas is not clean and is emerging as a major threat to the climate due to the sheer scale of carbon dioxide (CO2) the industry emits. In addition, they say, a significant amount of methane, a far more potent short-term warming agent, leaks during production of natural gas.

API points out on its website that when burned, natural gas produces about half as much planet-warming CO2 as coal and less air pollution, and has helped the United States reduce emissions by replacing coal in power plants.

API President Mike Sommers told Reuters that his group’s advertising ahead of the election seeks “to inform people of all generations of the importance of American energy leadership,” including on the environment.

“In this country, there is a lot of energy illiteracy,” he said.

Republican and Democratic politicians alike once saw natural gas as a “bridge fuel” to a low-carbon future, but some states, cities and towns have increasingly moved to phase out natural gas power generation or ban its use in new homes and buildings.

API declined to say why it switched to calling natural gas “cleaner” on its “Energy for Progress” website. It continues to use the words “clean” or “clean-burning” in relation to natural gas on its main website, api.org, and in Facebook ads.

Industry critics say the use of the word “clean” is not just a matter of semantics. Such claims about environmental friendliness are coming under greater scrutiny as the presidential campaign goes into its final stretch. Also, some institutional investors are pushing for more action on climate change, and the oil and gas industry faces lawsuits alleging it has deceived the public about the harm of its products.

“It’s about using green imagery and language to convince the public that their products are part of the climate solution rather than the essence of the problem,” said Richard Wiles, executive director of the Center for Climate Integrity, a nonprofit in Washington, D.C., which supports climate litigation against oil and gas companies.

API president Sommers said his group’s “Energy for Progress” campaign is focused on 37 congressional districts across the country. He didn’t detail which ones.

“API doesn’t endorse candidates; we endorse policies,” Sommers said. “We want to make sure that no matter who is in control that we have pro-majorities for energy in the House and the Senate.”

Founded more than a century ago, API’s mission in part is “to influence public policy in support of a strong, viable U.S. oil and natural gas industry,” according to its website.

The group’s nearly 600 members include the major U.S. and European oil companies. Their senior executives have sat on API’s board in recent years, according to the group’s tax forms, although API declined to identify its current board members.

API received a total of $116 million from membership dues in 2018, according to the most recent tax form.

Among its members is Anglo-Dutch major Royal Dutch Shell PLC, one of the largest oil companies in the world. In April, Shell said it paid API between $12.5 and $15 million in 2019. Whether any of this money was used for the “Energy for Progress” campaign was a question for API, Shell said. API declined to say how any of its members’ contributions were used.

Shell told Reuters it “has always been careful to note that natural gas is a cleaner alternative to other sources of energy – most notably coal.”

Some API ads and social media posts say gas is clean, not just cleaner than coal.

“Natural gas is already clean, affordable and efficient – and it’s getting better every day,” says one API ad on Facebook. Another ad, emblazoned across the doors of a train at a Washington, D.C. airport, depicts a man and a woman walking through a forest. “Thanks to clean natural gas,” says the slogan, “U.S. CO2 emission levels are the lowest in a generation.”

Dustin Meyer, API’s director of market development, told reporters in July that there may be “no better example” of a pragmatic solution to climate change than natural gas “in driving out dirtier fuels from the power mix.”

Nevertheless, natural gas is a fossil fuel that emits CO2 when burned. Its surging use means the United States could have roughly the same CO2 emissions levels in 2050 as it does now, if no new policies to control emissions are implemented, according to the U.S. Energy Information Administration’s Annual Energy Outlook 2020.

While reeling from an historic collapse in demand for oil and gas triggered by the coronavirus pandemic, API members also face dozens of climate-related lawsuits, most dating back several years.

Most recently, the attorneys general from Massachusetts, Minnesota and the District of Columbia have sued members of the fossil fuel industry, accusing companies of deceiving consumers about harms caused by their products.

API was named for the first time in the Minnesota suit, which alleges fraud, deceptive advertising and other violations.

Referring to claims about natural gas in the “Energy for Progress” campaign, Kate Konopka, assistant attorney general in the District of Columbia, told Reuters: “We think this campaign is very much akin to Big Tobacco claims decades ago in terms of harmfulness around the improved value of light cigarettes.”

Maura Healey, the attorney general of Massachusetts, who helped kick off the wave of litigation, told Reuters that API’s portrayal of gas as clean was “just not true” and consistent with a pattern of misinformation by the API.

In a statement to Reuters about the Minnesota suit, API said the oil industry was working to substantially reduce emissions and “that any suggestion to the contrary was false.”

In Europe, advertising watchdogs have ruled against oil companies in the past year for presenting natural gas and other fossil fuels as environmentally friendly. Several cases have been resolved informally, with companies agreeing not to repeat contested claims, although one company was fined.

In the United States, now the world’s largest producer of oil and natural gas, API members increasingly are subject to protests over new pipelines and pressure from activist investors over their lobbying activity.

In October 2018, the Institutional Investors Group on Climate Change, a group of European pension funds and asset managers, urged companies to be more transparent over climate-related lobbying. The group collectively manages more than 30 trillion euros ($35.60 trillion) in assets – including in oil and gas.

Clare Richards, senior engagement manager for the Church of England Pensions Board, said omitting the full truth about natural gas is “tantamount to false advertising.”

API president Sommers said some investors and activists will never accept the benefits of natural gas.

“I think we just view the future differently,” he said.