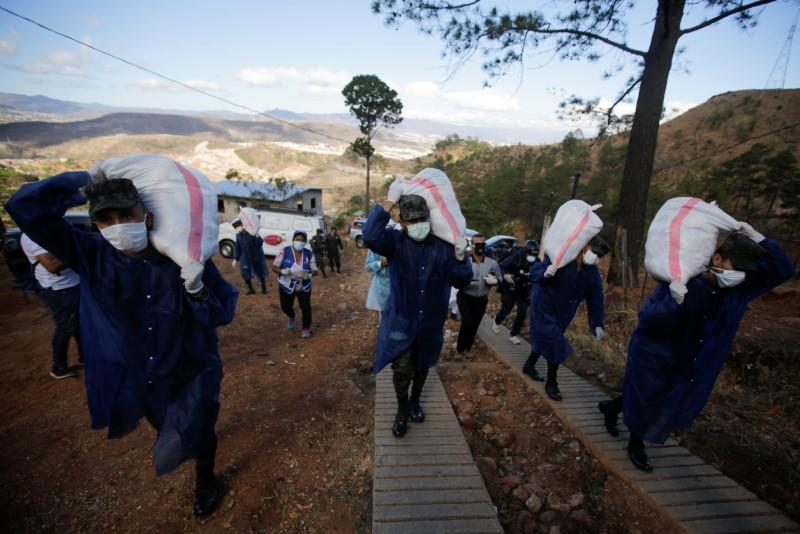 TEGUCIGALPA (Reuters) – Armed Honduran soldiers began delivering food to some 3.2 million people on lockdown in their homes on Wednesday, part of the government’s efforts stop the spread of coronavirus in a nation with few resources and a limited public health system.

So far, Honduras has reported 36 cases of the virus and no deaths. To prevent the virus from spreading, President Juan Orlando Hernandez has suspended public transportation, closed government offices and businesses, and ordered people nationwide to stay indoors at all hours.

“We are doing everything in our power to save lives. This includes making sure the most vulnerable have food at home on their tables,” Hernandez told a national television network.

The distribution of beans, rice, sugar, butter, cornmeal and spaghetti along with soap, detergent and hand-sanitizer for 6,000 families began in the impoverished Los Pinos neighborhood in the capital of Tegucigalpa on Wednesday. The army will gradually bring supplies to 800,000 families total in San Pedro Sula, La Ceiba and Choluteca, some of Honduras’ biggest cities, each of which have reported cases of coronavirus.

On Tuesday, residents in various parts of Tegucigalpa protested on the streets to demand food, saying they were unable to work or shop for groceries because of the lockdown.

“This situation has been sad because we didn’t have anything – there’s no transportation, no money. We didn’t have food anymore,” said Maria Montoya, 70, a Los Pinos resident who said her husband, a security guard, has not been able to work.

In Los Pinos, which is controlled by the violent Barrio 18 gang, uniformed soldiers in bulletproof vests and carrying M-16 rifles arrived in army trucks with supplies meant to last 15 days per family, and went on foot through steep narrow streets to deliver packages.

“We are going to go door to door. We want whoever needs it, who doesn’t have money, to have this food package, while this difficult situation lasts,” Hernandez said.

Many other families were going without aid on Wednesday, however, spurring further protests in various parts of the country, with residents blocking a road for several hours outside Tegucigalpa and demanding supplies.