Police say they’ve laid a charge against the half-brother of the deceased after a homicide investigation was launched in Prince Albert, Sask., last month.

Officers were initially called to a home in the 800-block of 17th Street West about a person in cardiac arrest at 8 p.m. on April 8.

A three-year-old girl was found unresponsive and life-saving efforts were made by members of Parkland Ambulance while en route to Victoria Hospital, according to a press release.

Emily McCallum-Daniels was later transferred to Saskatoon’s Jim Pattison Children’s Hospital where she was declared dead by medical staff on the afternoon of April 9.

An autopsy was completed on Tuesday. The cause of death was not released by Prince Albert police.

Fabian Morin, 21, is facing a second-degree murder charge in relation to the death. Police said the accused made his first court appearance by video link on Wednesday and has been remanded in custody until his next court date scheduled for June 5. 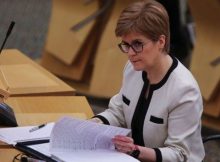 SNP crisis: Sturgeon faces backlash from own members as Party divided on independence plan
Recent Posts
Copyright © 2020 miamiheatnation.com.
This website uses cookies to improve your user experience and to provide you with advertisements that are relevant to your interests. By continuing to browse the site you are agreeing to our use of cookies.Ok