A series of gruesome horse and pony killings in France have left police baffled and the equine community gripped by fear.

Up to 30 incidents have been reported in pastures across the country, including ears being sliced off, eyes removed, genitals cut, sides slashed and blood being drained.

No meat is taken from the carcasses.

Some of the horrific acts could have been ritual mutilations by an unknown cult, while there are other theories about a “chilling” challenge on social media, or copycat crimes.

In the majority of attacks, an ear – usually the right one – has been sliced off, echoing matadors taking trophies in a bullring.

Agriculture minister Julien Denormandie said he was “excluding nothing” in the investigation and “all means are in motion to end this terror”.

He added: “Ears are cut off, eyes removed, an animal is emptied of its blood.”

The crime locations range from the mountainous Jura region in the east to the Atlantic coast in the west, with many taking place during this summer.

A police spokeswoman in Paris said: “We do not understand the motivation. Is it a satanic rite, insurance fraud, some macabre trophy hunt or an internet challenge? We don’t know. It is very traumatising.” 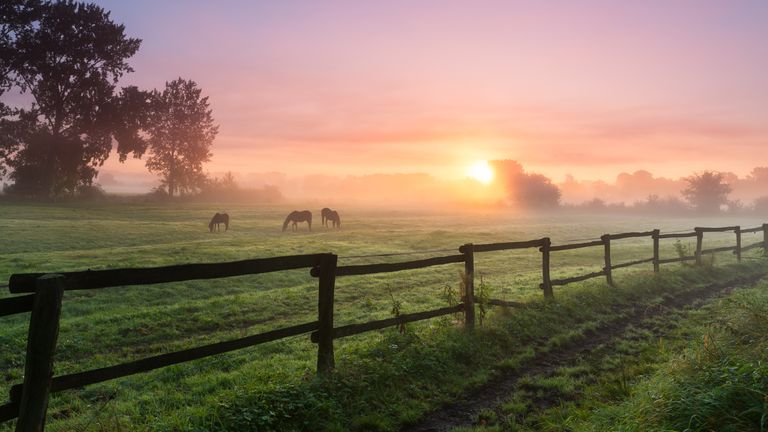 There is speculation about how such barbaric acts, some surgical in nature, could be carried without knowledge of equine anatomy or on a horse that could presumably flee.

Veterinarian Aude Giraudet, chief of the equine division at the National Veterinary School of Alfort, said: “A fearful horse in a pasture won’t get caught.

“The horse who feels confident with people … he’ll come, find it normal that you put a harness on it or a rope around its neck. I’m not sure you need great knowledge of horses.”

She said an ear can be cut off while the horse is standing, but the animal would need to be prostrate for more grisly mutilations.

A man confronted two attackers at his animal refuge last Monday in a village in the Bourgogne-Franche-Comte region.

The pair fled in a vehicle.

Nicolas Demajean suffered an arm injury during a struggle with one intruder who had a knife, as the other slashed the sides of two ponies, who are traumatised but recovering.

He told TV station France 3: “I used to have confidence putting my horses out to pasture. Today, I have fear in my gut.”

The following day, a young pony was targeted in the Saone-et-Loire region. In another case, some of a horse’s organs were removed.

The president of the French Federation of Equitation has offered to help police investigate the cases.

“We’re all afraid,” said Veronique Dupin, an official of a riding club in the Yvelines region west of Paris, asking that the exact location of the stable not be identified.