BBC host Anna Foster was forced to intervene as a furious row erupted between a Democrat supporter and Republican live on air. Republican Students for Trump campaigner Eric Magvas was discussing the divided state of American politics with Republican campaigner Paula Kampf on BBC Radio 5 live. Ms Kampf eventually erupted after she admitted that she was left stunned at how many people supported Donald Trump.

The row began as Mr Magvas disputed some of Ms Kampf’s claims and hinted that there was a surge in left extremism, made up of people who hated America.

Ms Kampf said: “I am wrestling with the reality that this many people in the US are willing to vote for a fascist, misogynist, racist person who steals children from their families and puts them in cages.

“I am really struggling with why this is the state of things in America.”

Mr Magvas disputed the claim that it was President Trump’s idea to put children in cages to deal with immigration.

He said: “I mean it is hard to argue with someone who is just throwing out names and name-calling. 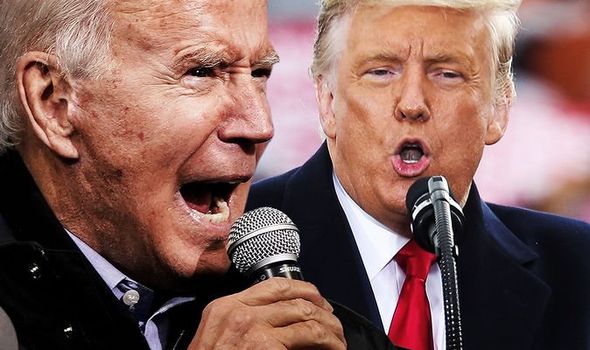 “Just to clarify with the cages it was the Obama-Biden administration that built those cages and put the kids in there, to begin with.

“To go back to your first point, I can’t believe so many people are voting for Joe Biden, a man who is beholden to far-left revolutionaries and very liberal activists.

“They hate this country and want to rewrite the history books.”

Ms Kampf snapped and demanded Mr Magvas clarify whether he was saying that she hated America because she was a liberal.

He clarified that he did not mean her specifically but rather there are people who have caused chaos in the country.

He said: “There is a large portion of people that Joe Biden refuses to condemn who have been burning our cities and destroying our country.”