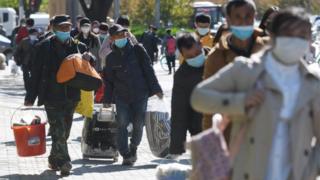 China is continuing to under-report the true levels of deaths from Covid-19, national security officials in London and Washington believe.

But European officials are wary about directly challenging China over the figures, sources told the BBC. That concern also extends to confronting Beijing over an information campaign to improve its standing and distract from blame in the crisis.

China has denied allegations of a cover up, saying it has been transparent about its efforts to battle the virus.

On 17 April, officials in Wuhan, the city where the outbreak is believed to have begun, raised the death toll from Covid-19 by 50 per cent overnight. They said the sharp increase reflected updated reporting and deaths outside hospitals, insisting there had been no cover-up.

But several officials in London and Washington say they still believe the picture is not an accurate reflection of the death toll, and that the central government in Beijing knows this. They do not however believe China knows the real figure for certain and is hiding it.

Western intelligence officials say that figures underplaying the toll are likely pushed up the chain from a local level by Chinese officials nervous of revealing the full truth, and these make their way up to Beijing, with officials at the top fully aware of this problem occurring along the chain.

“It is impossible to know what the figures are in China. What we do know is the figures are very likely to be wrong,” Tom Tugendhat MP, Chair of the Foreign Affairs Select Committee, told the BBC.

Many countries are struggling with quickly reporting precise figures and establishing which deaths are due to Covid-19, but China is different, Mr Tugendhat argued, because scientists there and others are “afraid of the state punishing them for telling the truth”.

“In China you always have the problem of what the localities are reporting up to the centre,” said Charles Parton, a former UK diplomat in China and now a senior associate fellow at the Rusi think-tank.

Beijing was also likely to be calibrating the figures for audiences inside and outside the country, Mr Parton said.

“The Chinese government is making a decision of what is the lowest number we can get away with to prop up the line that we have been far more successful in dealing with this than the West.”

Governments in Europe have been wary of engaging in a diplomatic row with China at a sensitive time. One UK official, who like others declined to speak on the record, said there was a “nervousness” about confronting China and that relations were “delicate”.

Countries are dependent on Beijing for deliveries of vital equipment in dealing with the crisis and want to keep the flow of information open to help understand what happened this time and prevent future outbreaks. Experts said the approach needed to be carefully calibrated.

“We need to dial down the rhetoric and the confrontation because we’ve got something more serious to deal with,” Mr Parton said.

In the US, by contrast, the issue of China is becoming highly politicised in an election year, with competing calls for a tough line on Beijing and pressure to investigate the origins of the virus.

China has denied there was a cover up. “China has been open and transparent from the very beginning,” Liu Xiaoming, the country’s ambassador to the UK, said on Thursday.

He said China was on a mission to defend its reputation against criticism in the media and Western countries which did not portray its side of the story.

Western officials say China is keen to play up its success in combating the virus and minimise any fallout from its role as the origin of the virus and early failures to be open. A report by the European External Action Service (EEAS) looking at the spread of disinformation was, according to one European official, pulled from publication because of concerns about Chinese reaction.

The report, which had already been circulated to member states and leaked to media, was reported to have said that China was running a global campaign to deflect blame for Covid-19 with the aim of improving the country’s international standing and said there had been both overt and covert activity.

The EEAS denied a report was due to be published, saying an internal report was leaked.

Analysts say they have seen a push from Chinese media to emphasise the country’s success and other’s failings in dealing with the virus (Russia has also been emphasising the West’s failings in its strategy).

China’s messaging is believed to reflect fears from Beijing of a backlash once the crisis is over. A New York Times report this week also claimed that Chinese “agents” had been pushing misinformation in March about a lockdown in the US.

The agents were not alleged to have originated the information and the volume and extent of their activity is unclear. Sources in the UK have played down the extent to which they have seen similar activity and say they have not seen large-scale state disinformation campaigns but rather lower-level activity.

“Our priority is to protect UK citizens from disinformation by any actor, whether state or non-state,” a spokesman said. “We are actively monitoring for disinformation narratives related to Covid-19 which could impact the UK.”