Over 12,000 men, women and children ran out of tents in panic as the fire destroyed most the camp. 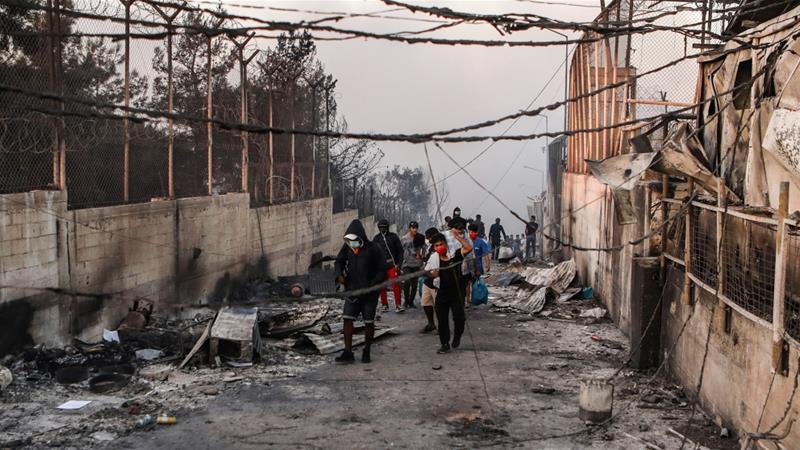 European officials said the fate of 12,600 refugees and migrants now homeless after a fire at their camp on a Greek island needs to be addressed as a top priority.

They also said the incident is going to force Europe to reconsider how it cares for people who reach its shores.

No deaths were reported and the fire was largely under control by the morning hours, according to the Greek government.

But the incident has shone a harsh light on European policies that left 12,600 crowded in a camp designed for about a fifth of that number and has created pressure to find housing for the camp’s residents, some of whom have been waiting for months for the chance to leave the camp and travel onwards.

Greek Prime Minister Kyriakos Mitsotakis said the incident had shown that the situation on Lesbos is untenable and that Greece needs the help of its EU allies in managing the situation.

“It’s a question of public health, of humanity, but also national security,” he said in a statement broadcast by ERT.

Under present EU rules, those seeking asylum must make their claim in the member state where they first arrive, leading to bottlenecks at the EU’s external borders.

The system puts great pressure on Greece, Italy, Spain and Malta, among others, but several other member states oppose permanent redistribution quotas.

Pressure also builds within the camps as the people living there increasingly losing hope that they might reach Europe.

Government spokesperson Stelios Petsas said the cause of the fire was suspected to be arson. He also said camp residents had thrown stones at firefighters and tried to prevent them from putting the fires out, adding that Athens has sent additional riot police units to the island.

Giorgos Koumoutsakos, the Greek deputy minister of migration, said the fire had been started during protests by migrants and refugees who did not want to go into isolation after testing positive for coronavirus.

After warnings from aid groups about the high risk of the spread of COVID-19, the first case of coronavirus infection was reported at the camp last week. As of Tuesday, 35 cases had been confirmed.

On Wednesday, Germany pushed for urgent reform of the EU’s migration policies, with its minister for Europe telling the AFP news agency it was all the more crucial to act quickly.

“We urgently need a common refugee intake programme among as many EU countries as possible and finally a common asylum and migration policy for the EU,” said Michael Roth.

“Protecting Europe means defending human rights. Germany and the European Union must quickly help the refugees, and Greece now needs our support and solidarity,” stressed the minister, whose country holds the rotating presidency of the bloc.

Fearing a humanitarian disaster, German Chancellor Angela Merkel kept the country’s doors open, allowing in hundreds of thousands of asylum seekers, a policy the far right seized upon to gain a foothold in parliament at that time.

In 2016, the bloc struck a deal with Turkey for Ankara to take back migrants in exchange for financial assistance and political concessions.

Last September, Germany, France, Italy and Malta agreed on a temporary mechanism, on a voluntary basis, for the distribution of migrants and refugees rescued at sea.

So far, however, only a few countries, such as Portugal, Luxembourg and Ireland, have joined the initiative.