Trade figures have shown a record drop in exports and imports to and from the European Union from December 2020 through to January 2021, with the cause partially blamed on the Brexit transition period. Data from the Office for National Statistics (ONS) has shown the record plunge in trade, but the ultimate cause may be more complicated.

From December 2020 through to January 2021, the EU’s exports from the UK declined by a staggering 40 percent.

Imports were not far behind, decreasing by 28.8 percent in the same time frame.

Trade outside of the EU also saw a drop, but by significantly less at 12.7 percent for imports.

And exports from non-EU countries actually gained 1.7 percent, despite the difficulties thrown up by the coronavirus pandemic. 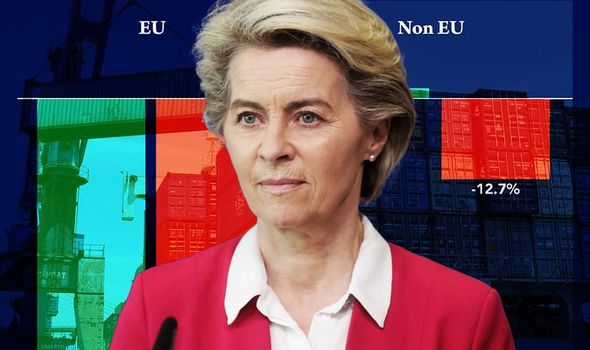 In November and December, the ONS reported seeing “increasing imports and exports of goods…These increases were consistent with potential stockpiling of goods from the EU in preparation for the end of the EU exit transition period.”

These increases were also seen in the lead to the two previous Brexit deadlines in 2019.

While the transition period may have seen trade decrease, the start of lockdown at the start of January could also have contributed.

The reason behind the decrease could be blamed on several factors, but the Brexit transition period has been partially to blame say experts.

What do you think? Have your say in the comments here. 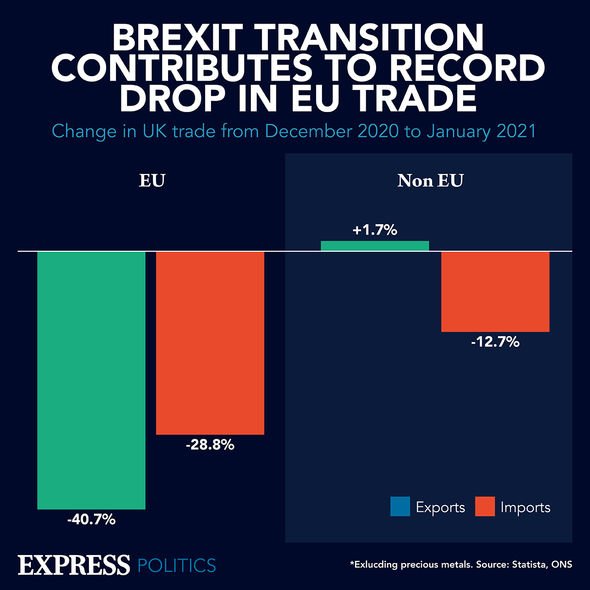 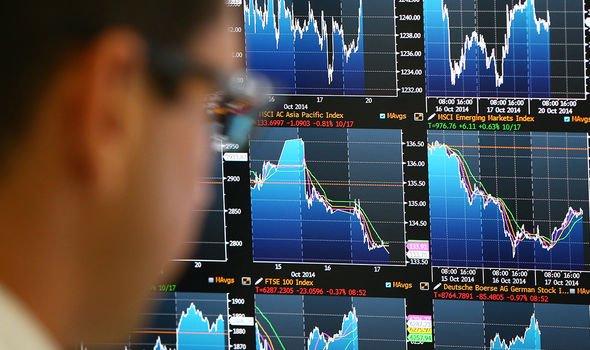 Samuel Tombs, the chief UK economist at the consultancy Pantheon Macroeconomics said: “Brexit is best seen as a slow puncture, rather than a sudden blowout, with the costs gradually accumulating in the form of lower investment and immigration than otherwise would have been the case.”

Suren Thiru, the head of economics at the British Chambers of Commerce, said: “The practical difficulties faced by businesses on the ground go well beyond just teething problems and with disruption to UK-EU trade flows persisting, trade is likely to be a drag on UK economic growth in the first quarter of 2021.”

There have been several reports into the disruption to trade at the start of the year.

However one unknown remains as to whether the decline will continue, or start to pick up once the ‘Brexit hangover’ has eased.

The ONS said its own ‘Business insights and impact on the UK economy’ data which suggests these “teething problems” have already begun to ease, with figures showing signs of trade starting to increase.

The ONS writes: “BICS data report that, of currently trading businesses that have reported challenges at the end of February 2021, the largest proportion of businesses’ reported main cause of challenge was the end of the EU transition period.

“This has risen from mid-December 2020. In contrast, those reporting the coronavirus as their main challenge fell over the same period.”

While the EU has seen a huge decline, imports and exports between China and the UK have soared. 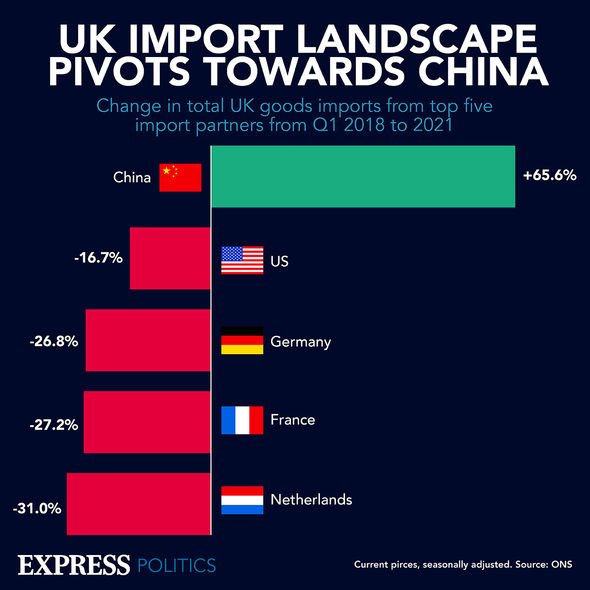 Professor Dr Stefan Stein, Founding President and Professor for International Business Management at GISMA Business School told Express.co.uk: “If imports and exports are taken together, China has become the EU’s largest trading partner and has overtaken the USA in 2020.

“The USA under Trump, the trade and other conflicts have done more harm than good.

“It will take the new administration quite some time to fix the damage, while China develops from an even more powerful position.”

And Brexit has played a big impact when it comes to the UK. Professor Stein said: “In the concert of the big players, the United Kingdom has minimised itself with its self-imposed Brexit. Success stories look different.

“One noticeable consequence of Brexit is the decline in investment and the shortage of workers.

“While the UK and the EU are in a sausage war over the control of meat products, China is the economic nation that has come through this global economic crisis best.

“In the economic upswing that is now following, China’s starting position is particularly good.

“The coffers of the Chinese are full, we will see investment activity increase in the UK and Europe and elsewhere on this planet where others cannot even follow due to the consequences of the crisis and lack of own strategy.”