The EU’s response to the coronavirus crisis, which is spreading across the continent, has sparked fury in Italy, with politicians insisting it “would be better to leave Brussels”. Italian bosses have warned the coronavirus could claim its next victim – Europe.

The economy of the 27-nation EU is on the brink of plunging into a deep recession after lockdown measures were imposed in nations across the continent from mid-March to halt the pandemic.

The bloc agreed a rescue package worth half a trillion euros to aid battered economies on Thursday.

But it was not without fraught discussions between the more fiscally conservative north and the indebted south, which has been hit hard by the pandemic and pushed for unprecedented measures like issuing joint EU debt.

Italian MEP Adinolfi (Lega) said: “The EU response to the coronavirus crisis has been inadequate. It would be better to leave Brussels. 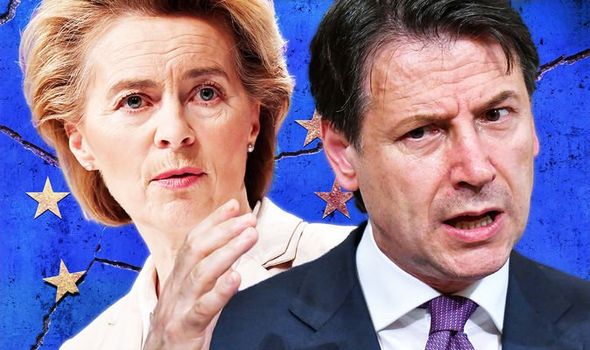 “If this is what the EU is about, perhaps it is better to collect signatures for the referendum to abandon Brussels.”

Meanwhile, Maurizio Verona, mayor of Stazzema in Tuscany, wrote to German Chancellor Angela Merkel saying: “The next victim of COVID-19 will be Europe unless there is more solidarity between states”.

EU finance ministers signed off a half-a-trillion euros deal to support coronavirus-battered economies last week, but left open the question of how to finance recovery in the bloc headed for a steep recession.

The agreement was reached after EU powerhouse Germany, as well as France, put their feet down to end opposition from the Netherlands over attaching economic conditions to emergency credit for governments weathering the impacts of the pandemic and offered Italy assurances that the bloc would show solidarity.

JUST IN: Eurozone to be crushed by deepest recession since Great Depression

But the deal did not mention using joint debt to finance recovery – something Italy, France and Spain pushed strongly for but which was a red line for Germany, the Netherlands, Finland and Austria.

For weeks, EU member states struggled to put on a united front in the face of the pandemic, squabbling over money, medical equipment and drugs, border restrictions and trade curbs, amid fraught talks laying bare their bitter divisions.

Southern EU states, led by Italy, demanded far-reaching measures like issuing joint debt, clashed with the Netherlands, which acted as the bulwark of the fiscally conservative north, which is calling for more restraint and narrowly focused measures.

Mauro Ferrari, former president of the European Research Council, said he was “disappointed” in the EU’s response.

He said: “I have been extremely disappointed by the European response to COVID-19, for what pertains to the complete absence of coordination of health care policies among member states, the recurrent opposition to cohesive financial support initiatives, the pervasive one-sided border closures, and the marginal scale of synergistic scientific initiatives.”

Jean-Paul Fitoussi, from Science Po in Paris, said the package amounts to “collective suicide”, telling the Daily Telegraph: “If there is no real mutualisation of debt, we will either slide further underwater, or take the inevitable politically incorrect step and say, ‘Enough is enough, let’s get out’”.

It comes after Italian Prime Minister Giuseppe Conte warned the very future of the EU was at stake over its response to the coronavirus.

Mr Conte said: “We need an economic and social response at the European level.

“It’s a big challenge to the existence of Europe.

“If Europe fails to come up with a monetary and financial policy adequate for the biggest challenge since World War Two, not only Italians but European citizens will be deeply disappointed.

“If we do not seize the opportunity to put new life into the European project, the risk of failure is real.”