German MEP Martin Schirdewan snapped at the European Commission in a scathing rant on the institution’s performance. The frustrated MEP argued the EU was moving at a “snail’s pace” regarding the vaccine rollout. He also warned of future consequences of delaying the movement of vaccines to other nations like the UK.

He insisted that if he was forced to give the Commission a school report it would be minus five and the institution would be held back another year as Germany grades are ranked 1 to 6, 1 being best.

He said: “In the EU we are vaccinating at a snail’s pace.

“The epidemic is continuing and many thousands of EU citizens have died of COVID-19 and hundreds more are added to the total every day.

“Economic growth in the EU over the course of the last year fell by up to 8 percent. 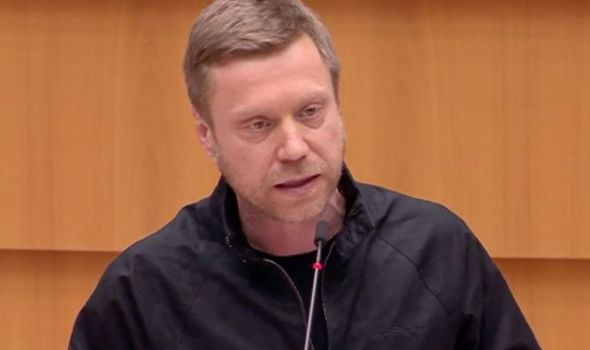 “This is a historic crisis that requires political responsibility to be taken because discontent is growing in the population.

“I am concerned that Europe is continuing without leadership and responsibility.”

The German MEP asked when this would be corrected to ensure better growth in future.

He also called on the EU to ensure a global alliance on vaccine production to protect citizens.

He continued:  “The Commission admitted to mistakes, but why do these not get corrected?

“Publish all contracts with pharmaceutical companies.

“Finally release patents, then the vaccines can be manufactured with all globally available production capacities.

“Develop a common European strategy of how to fight the virus, how to coordinate health protection and how to protect the social and economic consequences for the citizens.

“You have made yourself dependent on big pharma companies and trust in the market.

“In the case that no vaccines should be delivered to the global south and at the same time you’re talking about a vaccine export stop.

“But you do know that in the case of an export stop there can be retaliation measures, which means that the vaccine production in the EU itself can be damaged because of this.

“And the result would be that everyone would be worse off in the end.

“If I wanted to give you a school grade, it would say The European Commission: minus five.”