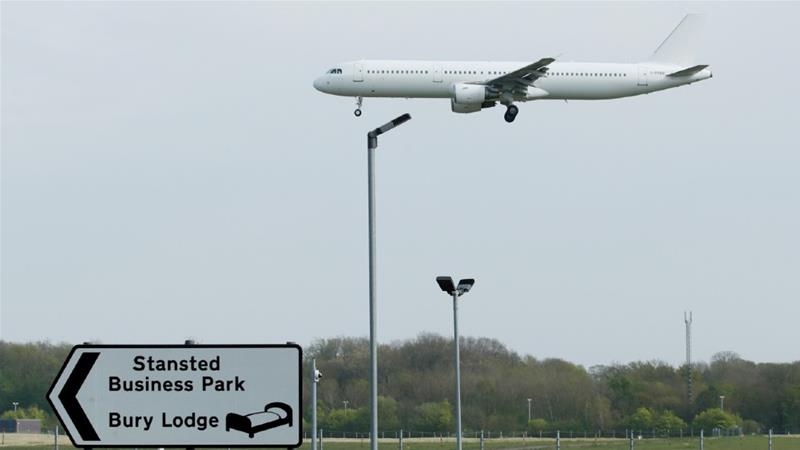 London, United Kingdom – Seasonal workers from Romania were flown into the United Kingdom on a special charter flight on Thursday evening to help fill a huge shortage of workers to pick fruits and vegetables on the country’s farms.

A flight from Bucharest, operated by Air Charter Service (ACS), touched down at Stansted Airport near London at around 5pm, carrying 150 people from Romania, Glenn Phillips from ACS tells Al Jazeera. Workers were then taken by bus to farms in the Midlands and the South East.

Farms across Europe are facing an acute labour deficit as a result of the travel bans that have been in place since mid-March amid the coronavirus outbreak. Farmers are deeply concerned about rotting crops, rising prices and a shortage of fresh fruits and vegetables.

The UK is following the example of Germany, where a programme allowing the arrival of 80,000 migrant workers over the course of two months has been under way since April 2. ACS has already operated a total of 13 flights in the past three weeks, five of which have been in the past couple of days, carrying a total of 18,740 workers from Romania and Bulgaria to Germany, says Phillips.

Workers are flying to Germany in controlled groups to prevent the possible infection of others on the way, and are subject to medical checks upon arrival. They then must live and work separately from other staff for two weeks, and wear protective gear.

Announcing the programme, Germany’s Agriculture Minister Julia Kloecker said it was a “pragmatic and goal-oriented solution”. She said the hope was to find an additional 20,000 workers over the next two months among Germany’s own unemployed, students or resident asylum seekers.

This is the first time ACS has transported seasonal workers, who would usually travel by the now-halted commercial services such as easyJet and Ryanair. Phillips said a seat costs approximately 250 pounds sterling ($310) on Air Charter, double the cost for a seat on a budget airline.

Plugging the gap in the UK

Currently, labour experts say, farms in the UK need 90,000 people to fill roles usually carried out by seasonal migrant workers. Thousands of people are particularly needed in the next few weeks as the harvesting season for most farms and crops begins from May.

“Getting workers on farms is absolutely vital for the UK to get through this pandemic,” says Donna Holland from the charity Concordia, a leading supplier of agricultural workers. Concordia has been working to temporarily bring in around 10,000 labourers – half from the EU and the rest from Russia, Moldova, Belarus, Georgia and Barbados.

Concordia, along with two other labour providers, launched a Feed the Nation campaign on 20 March, which seeks to recruit people in the UK. More than 36,000 people have applied to Concordia so far, half of whom have lost employment due to the outbreak, says Holland. But only 16 percent have opted to do the online interview. Of the 900 people offered jobs in the past 10 days, only 112 accepted employment contracts.

Samuel Masse, a wine producer in the South of France, hopes his country will follow the lead of the UK and Germany. France needs 200,000 jobs on farms covered, usually taken up by workers from Eastern Europe, as well as North African countries like Tunisia. As its borders remain shut, the government has called for unemployed citizens to cover farm work.

“It’s been a crisis for the wine business and many other sectors,” said Masse, the vice-president of the European Council of Young Farmers. “We need farmers with certain skills who often come from Eastern Europe, so we need the possibility for foreign workers to come,” he said.

A reminder for Brexit Britain

In the UK, many farms were struggling with a huge shortage of labour even before the pandemic hit. A combination of a tightening of the labour market and the rise in xenophobic public rhetoric in the UK surrounding Brexit has led to a decline in seasonal workers coming to the UK.

Under the UK government’s new immigration points-based system, only skilled workers from the EU will be eligible for most posts as of January 1, 2021. A proposed exception was to expand the seasonal agricultural workers’ scheme, from offering 2,500 visas a year to 10,000. However, the provision falls dramatically short of the 70,000 to 80,000 migrant workers brought into the country’s agricultural sector annually, mostly under the EU’s free movement rules.

“Everyone has their political views on immigration. But the reality is the free movement of workers in agriculture is needed. We can already see that if we cut a part of this system, everything falls apart,” said Masse.

He believes the labour shortages caused by the pandemic will be a stark reminder to the UK government about how its farms are dependent on foreign workers. Masse said: “The crisis that we are facing right now can show the UK the kind of situation that is to come after Brexit.”