About 1,000 people turned out for the rally, which has become a weekly event in the German capital, Berlin. 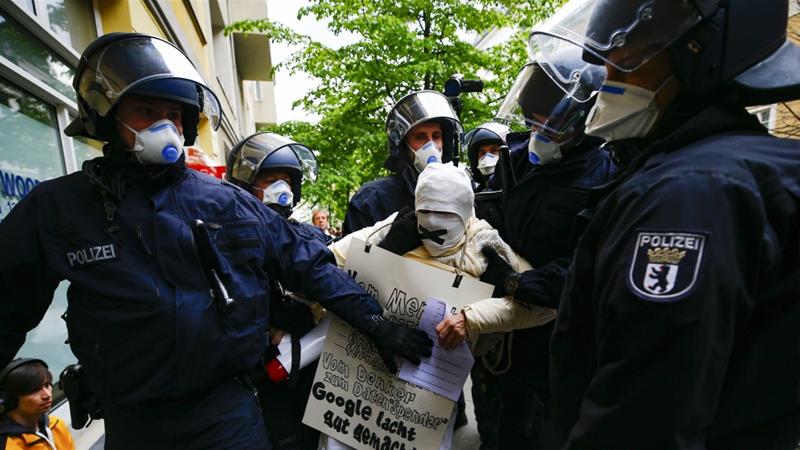 German police arrested dozens of protesters in Berlin on Saturday for flouting the coronavirus lockdown measures they were demonstrating against.

About 1,000 people turned out for the rally, which has become a weekly event in the German capital.

Police put up barriers around Rosa Luxemburg square, where the protesters were headed, leaving the participants to gather in nearby roads.

The protest “is not in line with the rules” in place to prevent the spread of coronavirus, police said on Twitter, telling those taking part to disperse.

Some of the demonstrators wore T-shirts accusing Chancellor Angela Merkel of “banning life” while others called for “freedom”.

Others brandished placards bearing slogans such as “Stop the pharmaceutical lobby”.

The protest was unauthorised, as Berlin is now under emergency rules banning gatherings of more than 20 people.

The protest organisers’ website called for “an end to the state of emergency” and played down the threat posed by the virus.

Public discontent with the confinement rules has been growing gradually in Germany, as in other countries, though Merkel’s popularity remains high.

She has received plaudits for her management of the health crisis, which has seen Germany’s COVID-19 toll remain significantly lower than in Italy, Spain, France and UK where the death toll in each country has risen above 20,000.

According to data from Johns Hopkins University, 5,877 people have died from the virus in Germany.

Opposition to the lockdown measures is being led by the far right, the main opposition force in the German parliament.

The far-right Alternative for Germany (AfD) party accuses the government of exaggerating the risk posed by the virus and has called for the immediate reopening of all businesses.