It has been purchased by Mr. Katz along with Melissa J. Rodriguez, Del Posto’s executive chef, and the chef James Kent, a former chef de cuisine at Eleven Madison Park, from Lidia Bastianich, Joe Bastianich and Tanya Bastianich Manuali. The sale includes the lease of Del Posto’s large space in Chelsea, which the new owners plan to use for three new businesses, following a renovation.

There will be a cocktail bar, a casual restaurant with wood-burning pizza ovens and an ambitious, special-occasion Italian restaurant in the spirit of Del Posto, which was first opened in 2005 by Ms. Bastianich, Mr. Bastianich and the chef Mario Batali.

“Jeff and Melissa were the driving force behind the success and evolution of Del Posto,” Mr. Bastianich said. “I am happy and proud that they will continue that evolution into the future.”

In 2019 Mr. Batali sold his shares in his many restaurants, including Del Posto, to a group led by the Bastianich family, after several women accused him of sexual harassment and assault. Former employees of the Batali & Bastianich Hospitality Group said Mr. Batali and Mr. Bastianich were known for fostering a sexist culture that ignored misconduct by male employees and demeaned female workers. 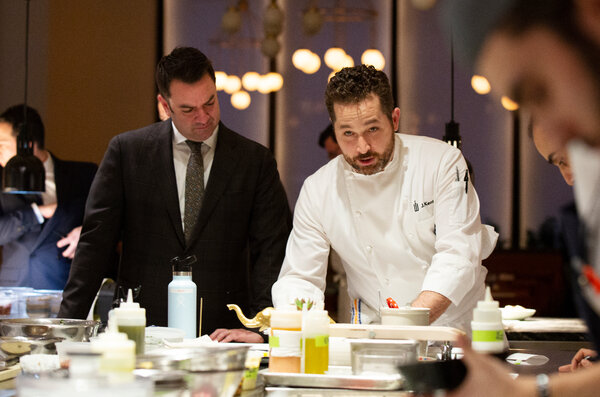 Mr. Katz, who started working at Del Posto in 2006 and became the general manager in 2009, said that he and his partners want to make a clean break from the restaurant’s past owners while continuing to push Italian food in America to new levels of excellence, as Del Posto did.

Del Posto has been closed since the start of the pandemic, and Mr. Bastianich auctioned off its more than 30,000 bottle wine collection last summer. Mr. Katz said that the restaurant employed between 200 and 215 people before the pandemic. “We had a really tight knit group,” he said. “Our intention is to try to get pretty much anyone back from the old team who wants to come back.”

Renovations at the Del Posto space will begin after an auction on Tuesday. Mr. Katz said that “everything is basically up for grabs” inside the opulently decorated space: plates, fixtures, wall panelings and lots of chairs.

He hopes the unnamed new businesses will open in the fall; the largest of the new restaurants will essentially replace Del Posto. When the restaurant received four stars from the former Times restaurant critic Sam Sifton, Del Posto was the first Italian restaurant to receive the highest rating since Parioli Romanissimo, in 1974.

Ms. Rodriguez was promoted to executive chef in 2017, following the departure of Mark Ladner. In the restaurant’s most recent review, in 2019, it received three stars from Pete Wells. Of Ms. Rodriguez, he wrote, “She gets her effects by following old Italian templates and putting them together so elegantly that they seem to light up from inside.”

Mr. Katz said Ms. Rodriguez will be the face of the flagship restaurant. “James and I are essentially her business partners, her operations partners,” he said. “It’s her restaurant.”

Ms. Rodriguez said the menu for the new restaurant is still a work in progress.

“There has been a lot of change in fine dining over the last few years, and we want to figure out what that means for us,” she said. “We want it to be fun, and we also want it to be celebratory.”

This isn’t the only new restaurant project for Mr. Katz and Mr. Kent. In 2019, they opened Crown Shy, on the ground floor of 70 Pine Street, in the financial district. This summer, they’ll open another restaurant, SAGA, on four of the top floors of the same building.