Ben Wallace warned that with Vladimir Putin defying “all logic” with his invasion of Ukraine, it was hard to predict how relations between Russia and the West will evolve. National Security Advisor Sir Stephen Lovegrove this week warned a “nuclear conflict” could erupt should communication with either Moscow or Beijing fail. Mr Wallace said the UK is keeping up contact with both nations, but appeared unable to entirely rule out nuclear weapons would not be deployed in the future.

The Sky News presenter asked: “Sir Stephen Lovegrove, the UK’s National Security Advisor, has warned in the last few days the West risks an initiation of nuclear conflict with China or Russia because of a breakdown of communication. Do you agree with him?”

The Defence Secretary said: “I went to Moscow to speak to our counterparts just before this war. We keep lines of communication open.

“I have met with the Chinese Ambassador about a year ago, and he’s right that it’s always important to talk to countries even if you find it difficult, or distasteful, or indeed it is a challenge because there’s a conflict in Ukraine.

“Fundamentally, that is not always the real component as to why security is imperiled.” 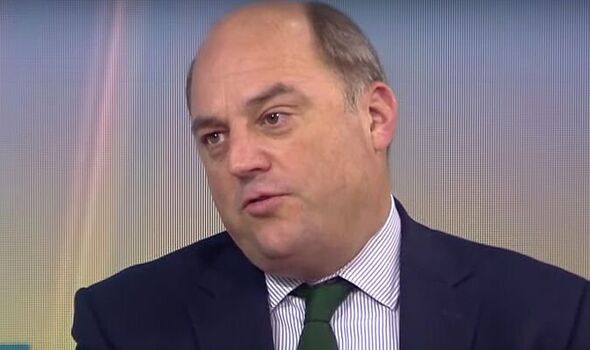 He continued: “It’s often the intention of the other country. President Putin has defied all logic with what he’s done in Ukraine.

“Everyone from his friends to his adversaries advised him not to do it, we saw the legendary marathon phone calls from Macron to Putin, and he still did it.

“That’s very hard because when someone just doesn’t want to listen to reason, sadly, you end up in a very difficult position. That’s where we are in Ukraine, proper war.

“The Russians are failing on the ground in many areas, Putin’s plans a, b and c have failed.

“Doesn’t matter how many times you say it’s not the right thing to do, you can’t just get on with warm words. Sometimes you need warm words and some hard power alongside it”