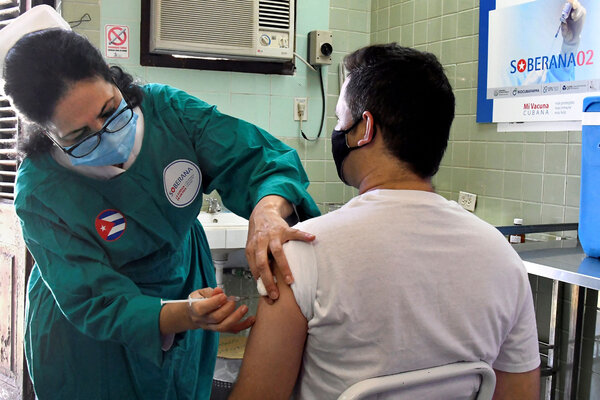 HAVANA — Cuba began a mass vaccination campaign on Wednesday in the capital, Havana, where authorities aim to eventually vaccinate 1.7 million people. The campaign is using homegrown vaccines that have not yet been shown to work, an emergency step intended to blunt the rapid spread of the coronavirus.

The country’s decision to deploy unproven vaccines mirrors the early introduction of vaccines in Russia, China and India, where regulators permitted mass vaccination campaigns to begin before the completion of Phase 3 clinical trials, which assess the vaccines’ effectiveness and safety.

In Florida, news reports critical of the Cuban government accused it of jumping the gun and endangering public health. American and European health regulators do not allow vaccines to be introduced, even for emergency use, until Phase 3 clinical trials are completed.

The rapid spread of a virus variant first detected in South Africa has contributed to a surge in cases in Cuba, and justifies the early large-scale use of the Sovereign 2 and Abdala vaccines, according to the country’s health minister, Dr. José Angel Portal.

“Confirmed cases are forecast to rise,” he said. “Our regulatory agency and health experts consider that this intervention’s benefits outweigh the risks.”

Scientists rely on Phase 3 trials, in which a vaccine is compared with a placebo, to determine whether vaccines work. Cuba intends to finish the trials for the two vaccines by June.

Cuban scientists argue that with more than 145,000 Cubans already vaccinated as part of clinical trials and an “intervention study” with health workers, they already have enough data to know that serious adverse reactions to the vaccines are rare.

Unlike the American and European vaccines, which were developed in novel ways, “the technological platform the Cuban vaccines are based on has been used for 30 years,” said Dr. Gerardo Guillén, who has led the development of the Abdala vaccine. He said Cuba’s vaccines “are known to be very safe,” and that the proven track record of the technology “factored into the decision.”

Cuba hopes to produce enough doses for its whole population by August. But scientists say that U.S. diplomatic and economic sanctions are slowing down production, making it hard for Cuba to do business with foreign suppliers and complicating international humanitarian initiatives to donate syringes to the island, which needs about 20 million more to vaccinate the whole country.

Of the 90 coronavirus vaccines around the world currently in clinical trials, five were developed in Cuba, the smallest country to develop and produce its own vaccines.

“We will probably be the first country to immunize its whole population with its own vaccine,” said Dr. Eduardo Martínez, president of BioCubaFarma, the state conglomerate overseeing vaccine development and production.