Health chiefs have blasted homeopaths for claiming potions made of duck heart and liver extracts were as good as coronavirus vaccines.

NHS England boss Sir Simon Stevens said peddling the myths had "crossed a dangerous line" and people taking their advice from homeopaths were putting themselves at risk.

He told the Telegraph the remedies reportedly being sold online could also make lockdown longer by slowing down the nation’s vaccine efforts.

Facebook has started removing posts by 4Homeopathy after the World Health Organisation (WHO) is understood to have stepped in.

One post dated January 5 told its 164,000 followers that diluted duck heart and liver extract had been distributed to “953, 416 families”.

It added a Covid-19 prevention study had received “spectacular” results using the remedy.

Fans were quickly taken in with one writing: “My homeopath says it takes less than two days to be rid of Covid!”

Another stated: “I’ve been using this for my family for months.”

A separate post from the Facebook account promoted the “Covid Homeopathic Data Collection Project”, linking users to a webpage containing a table of “remedies” for Covid-19.

Sir Simon told The Sunday Telegraph: “It’s one thing for homeopaths to peddle useless but harmless potions, but they cross a dangerous line when making ridiculous assertions about protecting people from Covid infection.

"Anyone who took those seriously would be putting themselves at higher risk of coming to harm from Covid infection.”

Prof Powis added: “Spouting claims on social media about cures that are not backed by scientific evidence and accurate public health advice is the latest in a long line of disturbing and potentially dangerous online myths.

"We urge everyone to ignore misleading claims and get vital protection against Covid when they are invited for their vaccine.”

Prof Karol Sikora, a former director at WHO, described the content as “deeply disturbing”.

The 4Homeopathygroup is described the Society of Homeopaths as a banner outfit for 11 combined homeopathic groups to “campaign and lobby” on behalf of their users.

Helen Earner, the operations director at the Charity Commission, said the findings were being examined as “a matter of urgency”.

The MHRA, the Government’s medical regulator, said it “cannot be legally sold or supplied within the UK”.

A spokesman for Facebook said: “We have removed violating posts on the page brought to our attention by The Sunday Telegraph and are continuing to investigate.”

Senator Roy Blunt, the No. 4 Republican and a party institutionalist, announces plans to retire. 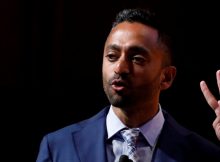