The first Britons have started arriving in green-listed Portugal after overseas holiday restrictions were lifted.

Only a dozen countries and territories are on the green list but most are either remote islands or do not currently allow UK tourists to enter.

Travellers returning from any of these countries do not need to quarantine, and will only be required to take one post-arrival test, under current COVID-19 restrictions.

The taxi drivers started arriving at Faro Airport long before the first flight arrived from the UK.

Live updates as lockdown eased across England, Wales and Scotland 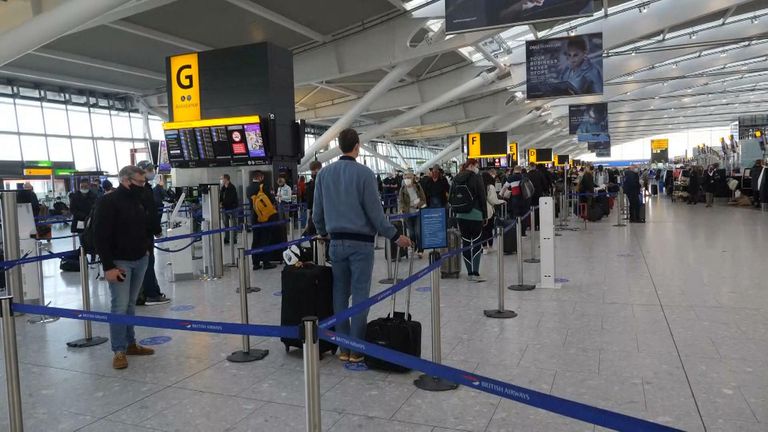 They wanted to make sure they got their place in the queue ahead of what was going to be their busiest day in months.

The thumbs up from one driver spoke for the feeling of them all.

They were delighted Britons were returning to the Algarve. It’ll be good for business.

And as the first flight touched down from Manchester, the president of Algarve tourism was there to greet some of the passengers.

Joao Fernandes could not hide his delight as he welcomed Frasier and Peter, friends who had just jetted in. 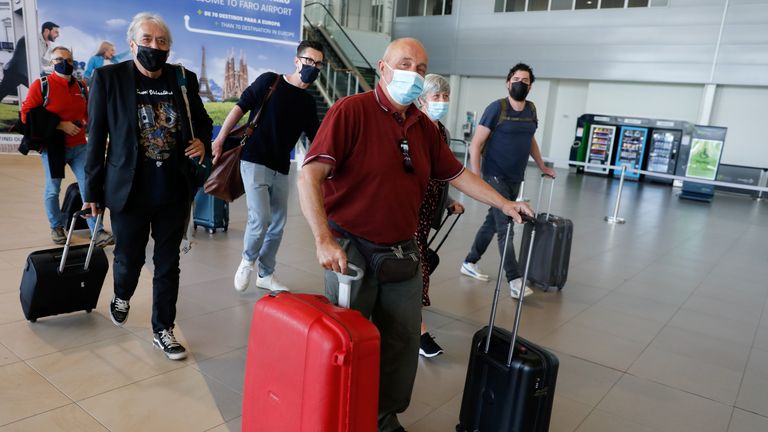 He told them to enjoy themselves but stay safe. They were given a box containing a mask, alcohol gel and local information.

I broke the news to them that if they planned long nights in the Algarve’s bars they were set to be disappointed.

“The bars have to shut at half-ten,” I told them. Frasier replied: “We will just have to start earlier.”

Asked how it felt to be on holiday again, Frasier said: “It’s unbelievable… it’s so good to get a feel of what it’s like to be away, and nice to get a bit of sun. I’ve missed it – big time.”

Peter added: “I come here regularly every year, twice a year, so it was like a last-minute thing… over the moon to be here. Love the place.”

Deborah Griffiths arrived and will meet her two sisters for the first time in over a year.

She told Sky News: “It’s amazing to be back and I just can’t wait to see them.”

Eileen and Ian Bond who had made the journey from Essex said this holiday had been a long time coming.

“We have a house here and have been coming to the Algarve for years. We’ve missed it,” said Eileen.

Asked if they were concerned that COVID restrictions including limited bar and restaurant opening times would spoil things, Eileen laughed and said: “We don’t come out here to party. We are getting a bit too old for that.”

There was genuine delight amongst the passengers at having landed in the Algarve with its sun, sea and sand.

And COVID restrictions may not be all bad news.

Strict social distancing restrictions mean on the beaches towels have to be 1.5 metres apart and umbrellas three metres. For now at least you won’t be allowed to be packed in like sardines while you’re sunbathing. 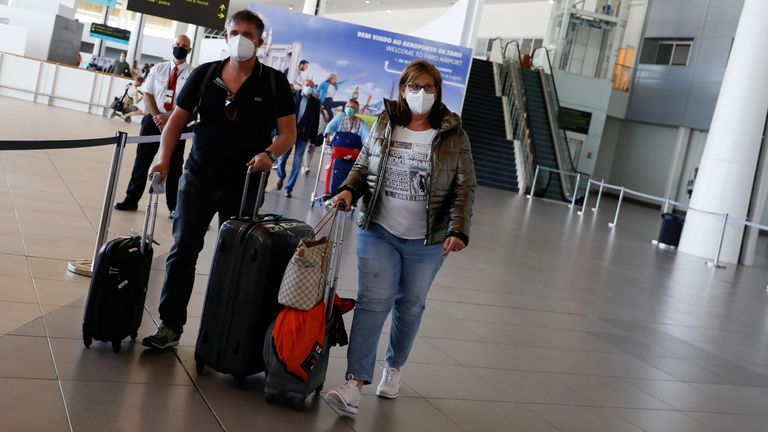 Twenty flights from the UK headed into Faro today with welcome visitors for a tourism industry that’s struggled over the last year.

Restaurants, hotels, and pubs have been prepping for days with thousands expected to arrive by the week’s end.

Daniel do Adro, from Algarve tourism, who is also the general manager of a local five star hotel, said the overwhelming feeling is now “optimism”.

After months of stagnation beds are filling up again, dining tables being occupied and wine and beer being poured for the British visitors.

The British he tells me are their biggest market in the Algarve and their presence is desperately needed and wanted.

Today that wish started to become a reality again.