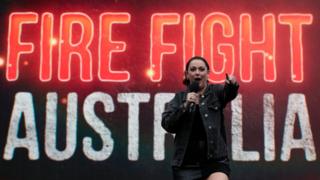 Millions of dollars donated to a global fundraiser for Australia’s bushfires can only be used by one state fire service, a court has ruled.

Many donors hoped money would go to victims, charities and animal groups.

Because the appeal was directed towards a state fire agency, the funds cannot be legally divided, a judge ruled.

This was despite the recipient – the New South Wales Rural Fire Service (NSW RFS) – intending to split the money in line with Ms Barber and donors’ directions, the Supreme Court of New South Wales said on Monday.

Ms Barber launched the fundraiser in January after her family was affected by the fires, which scorched land across the nation.

It went viral after it was shared by celebrities like Natalie Portman and Lizzo, raising A$20m within 48 hours. Facebook said it was the platform’s largest appeal ever.

How did this happen?

Many people pledging money had specified that they wanted their money going towards other causes, including fire services outside NSW.

The RFS is funded by government money but largely staffed by unpaid volunteers. It is not the only service to operate in this way – volunteer firefighting is common in Australia.

During the crisis, reports of firefighters having to pay for their own protective equipment sparked public outrage. Donations poured into the RFS, which maintains a charitable trust.

Following confusion over how it would split Ms Barber’s huge fundraiser, the RFS sought the court’s advice.

In his ruling, judge Michael Slattery said: “Some donors may have intended or hoped that the money they donated would be used for purposes beyond those which the Court has advised are permissible.”

But he said that honouring those intentions would breach the law around how trusts operate.

The judge said the money could be used to help volunteer firefighters and the families of firefighters killed battling the blazes.

However it could not be diverted towards other fire services, charities like the Australian Red Cross, animal welfare groups and other causes.

Massive blazes raged across every Australian state during the crisis, killing at least 33 people including 14 firefighters.

A royal commission inquiry into the natural disaster commenced on Monday, with testimonies from scientists who linked the extreme blazes to climate change.