Sweden has largely remained open for business during the coronavirus outbreak, with many bars, shops and restaurants welcoming customers.

Few mandatory restrictions have been brought in to help fight COVID-19, in contrast to most other European countries which have taken a tougher approach, including lockdowns.

Despite the seemingly relaxed approach to dealing with the virus, cases in Sweden have surpassed 4,000, with 146 people dying after contracting the respiratory illness.

But the nation does have a much lower reported case rate than the worst hit countries on the continent, including Italy and Spain.

Notably, Sweden is one of the biggest spenders in Europe on its public healthcare system, spending more per capita than the UK, Spain and Italy.

But despite having a higher reported case rate than the UK, which has a partial lockdown, Swedish workers and organisations are still operating largely business as usual, with the government taking a “wait and see” approach to the outbreak.

There are some restrictions in place such as limiting gatherings to 50 people instead of 500 and where possible, Swedes should work and study from home.

The public are also being advised to practise social distancing – but the measures are not nearly as strict as much of the rest of the continent.

For now, the government maintains its citizens can act responsibly and will stay at home if they experience any COVID-19 symptoms. On Friday, prime minister Stefan Lofven warned of “many tough weeks and months ahead”, where he outlined the measures.

His speech was largely approved of, according to polling company Novus, suggesting many people will abide by the voluntary restrictions, reducing the need for a national lockdown.

Scientifically, Paul Franks and Peter Nilsson, professors of epidemiology for Sweden’s Lund University, suggest the lack of action could be that Swedish modelling shows the country expects the rate of hospitalisation to be much lower than in other European countries.

This could be down to the understanding that many people will become infected but suffer no symptoms – keeping them away from the healthcare system.

Until now, there has been no widespread screening programme or extensive antibody testing – so there is no true, accurate picture as to who does and does not have COVID-19 in Sweden.

But the government said on Tuesday it will launch a national testing regime, with the focus initially on health workers and others in key jobs.

Sweden has tested around 36,000 individuals and mostly people in need of hospital care. Germany has been testing around 500,000 people a week.

Writing an essay in The Conversation, Professors Franks and Nilsson added that the virus will have an uneven spread in the country, due its lack of built-up metropolitan areas, suggesting, at least for now, some areas could be spared a major outbreak, lessening the need for a total shutdown.

They also suggest that the country could be aiming for a herd immunity tactic. It would mean around 60% of the population would need to catch, then recover from COVID-19, to dramatically slow the spread of the disease.

Global health officials have said that once people have recovered from coronavirus, they have a certain level of immunity, due to the build-up of antibodies.

There is also a practical argument in Sweden as to why there is no widespread lockdown, in that schools can remain open to allow parents to continue working.

Professors Franks and Nilsson also said that a lockdown would severely harm the economy, making it likely that funding for a health service would be reduced, putting more lives at risk in the future. 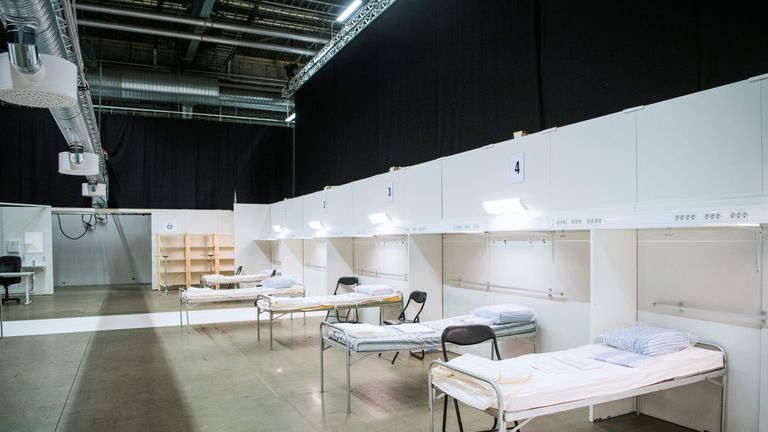 However, there is scepticism around the Swedish approach to the outbreak, and some experts do admit that the pandemic in the country is likely to get a lot worse and trigger a lockdown in the near future.

Sweden is making preparations for a high level of cases, building a makeshift field hospital at the Stockholm International Fairs facility with thousands of bed – suggesting a change in policy is not far away.