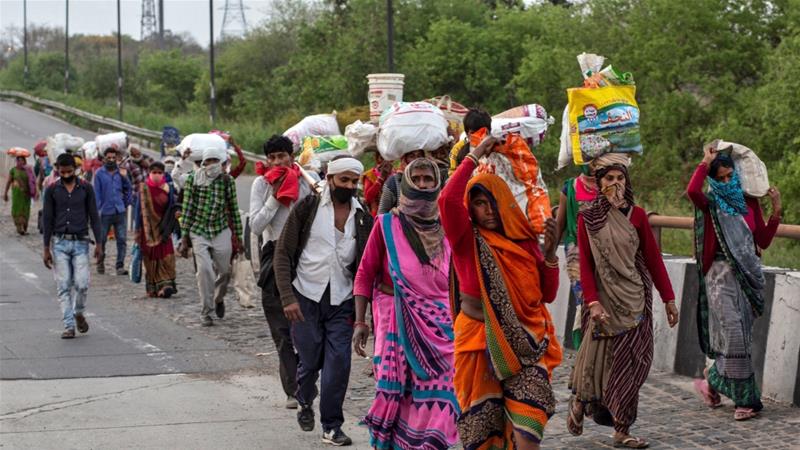 The first batch of migrant workers stuck due to the lockdown have left southern Indian city of Hyderabad for the eastern state of Jharkhand days after the government allowed their return, local media reported.

Millions of rural migrant workers lost their jobs after factories and businesses were shut in the wake of the nationwide lockdown announced by Prime Minister Narendra Modi on March 24. The 21-day lockdown was extended by 19 days, until May 3.

The central government said on Wednesday migrants as well as others including stranded students and tourists, would be allowed to board specially designated interstate buses if they do not exhibit coronavirus symptoms.

It has also allowed some shops to reopen and manufacturing and farming to resume.

In a notification, the Ministry of Home Affairs asked all states to designate nodal authorities and develop standard protocols for receiving and sending such stranded people.

Each train compartment will accommodate only 54 people instead of the usual capacity of 72 to maintain social distancing. Each passenger was screened for coronavirus symptoms before being allowed to board the train.

Jharkhand Chief Minister Hemant Soren on Friday instructed officials in his state to receive the workers and facilitate their movement to their respective districts.

Soren also tweeted saying two special trains will bring back students from Jharkhand from Kota city in the western state of Rajasthan on Friday.

NDTV reported that a train carrying about 1,000 workers will leave the southern state of Kerala later on Friday for the eastern city of Bhubaneswar in Odisha state.

Many migrants, penniless and hungry, had walked hundreds of miles from cities to their villages after the lockdown was imposed in late March, while others were stranded in makeshift camps in cities after all interstate public transport was cancelled.

India has registered another daily high in coronavirus cases, with nearly 2,000 recorded in the past 24 hours.

The government is due to decide the future of its 40-day lockdown on Sunday. In a meeting with the prime minister earlier this week, chief ministers of at least six states pitched for another extension in the nationwide restrictions.