Accelerating pandemic has left governments and people reeling, but some developments offer hope. 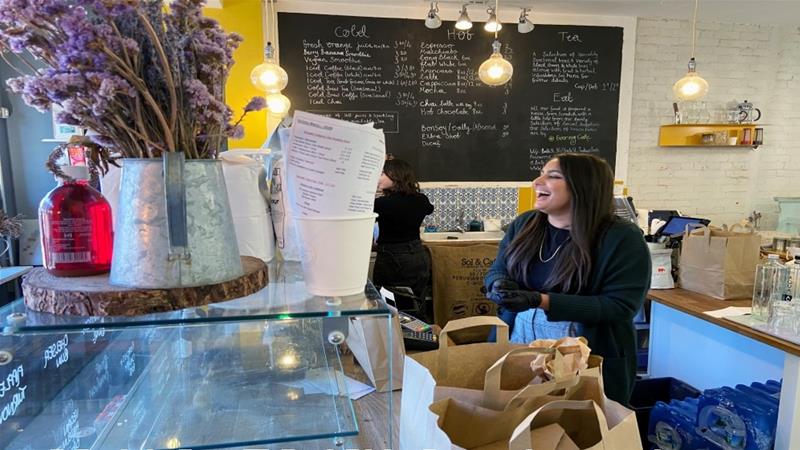 It’s been just over two weeks since the World Health Organization (WHO) declared the coronavirus outbreak, which first appeared in the Chinese city of Wuhan in late December, a global pandemic.

To date, more than 510,000 people have been infected worldwide, with more than 22,900 people dying from COVID-19, the disease caused by the novel coronavirus.

Infections, the rates of which have accelerated since the outbreak began, have touched nearly every corner of the world and prompted unprecedented and widespread travel restrictions and business closures that threaten a global recession. At least three billion people, including India’s 1.3 billion population, have been ordered to stay home.

Even as new cases in China have dropped dramatically, leading to the easing of many restrictions, places such as Italy, Spain, Iran, and the United States have become new hot spots for the virus, for which there is no vaccine or proven treatment.

The speed and severity with which the virus has swept across the planet have left international organisations, governments and individuals reeling.

But the last few months have not been without developments that offer reasons for hope.

The WHO launched a global trial to quickly assess the most promising treatments for the virus and the disease it causes. The organisation is currently looking at four drugs or drug combinations that were developed for other illnesses and are already approved for human use and could be made widely available.

The simplified study will rely on data generated from thousands of patients at participating hospitals in countries around the world, while requiring little extra time and effort from already overwhelmed medical personnel.

As of March 20, Thailand, Argentina, Bahrain, Canada, France, Iran, Norway, South Africa, Spain and Switzerland had signed on to participate in the trial.

During the global study, according to Science magazine, a physician can enter the information of a hospitalised infected person, who has signed a consent form, into a WHO website. The physician will tell the WHO website which of the possible treatments are available at the hospital, and the website will randomly assign the patient to one of the drugs available or to the local standard of care.

Physicians will record the day the patient left the hospital or died, the duration of the hospital stay, and whether the patient required oxygen or ventilation, Ana Maria Henao Restrepo, a medical officer at WHO’s Department of Immunization Vaccines and Biologicals, told the magazine.

The massive data set it yields could quickly indicate which treatments are the most effective.

“We are doing this in record time,” Restrepo told Science.

United Kingdom Prime Minister Boris Johnson on Tuesday night called for 250,000 volunteers to help deliver groceries and medicine to the most vulnerable citizens who have been ordered to self-isolate.

Within 24 hours, more than 400,000 people had signed up. That number soon rose to more than half a million, according to the BBC – larger than Britain’s armed forces, which currently stand at just over 192,000.

Under the National Health Service volunteer plan, healthcare professionals and some charities will be able to request help for their at-risk patients, who will then be matched with volunteers who live near them.

Any adults who are fit and healthy can apply to help deliver medicine from pharmacies, drive patients to appointments, or make regular phone calls to check on people.

About 11,000 former medics also agreed to return to the health service, while more than 24,000 final-year student nurses and medics will also aid the health system.

A silver lining of countries locking down across the planet, grinding transport and most industry to halt, has been a marked decline in air pollution.

Satellite imagery has shown pollution in China plummeting as large swaths of the country shut down at the height of the outbreak there.

The European Environment Agency (EEA) on Wednesday confirmed that the concentration of pollutants, in particular nitrogen dioxide, which is largely caused by road transport, recently massively declined in Europe “especially in major cities under lockdown measures”.

In Milan, the industrial capital of Italy, the average concentrations of nitrogen dioxide for the past four weeks have been at least 24 percent lower than four weeks earlier in the year, according to EEA. 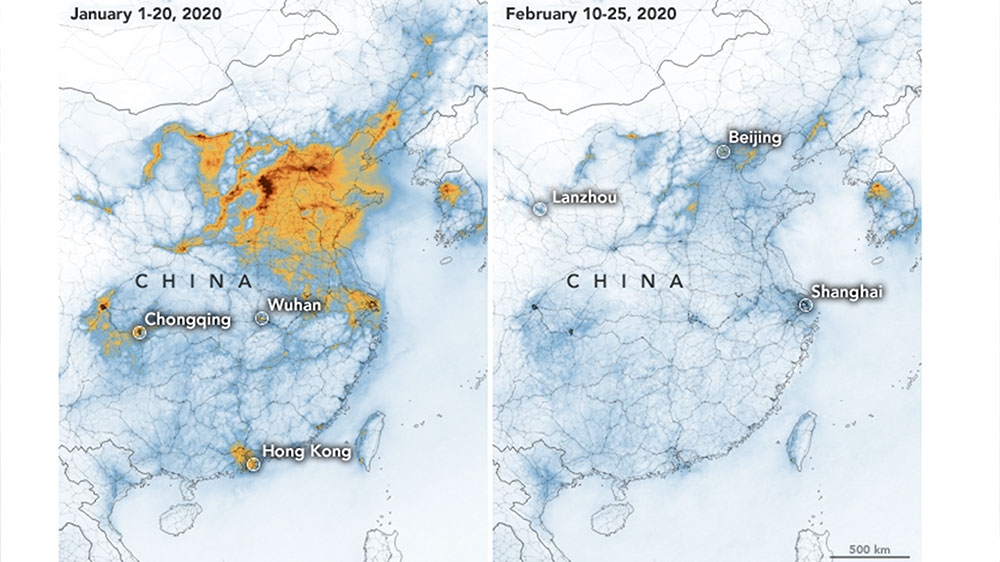 The trend can be seen beyond Italy: In Spain, Barcelona’s average nitrogen dioxide levels went down by 40 percent from one week to the next. Compared with the same week in 2019, that reduction was 55 percent.

In Madrid, the average nitrogen dioxide levels went down by 56 percent from one week to the next. Compared with the same week in 2019, the reduction was 41 percent.

Experts have urged patience in awaiting the outbreak of coronavirus in Italy, the world’s largest hot spot, to reach its peak. Scientists have been forced to learn about the new virus in real time as it spreads, making predictions particularly difficult.

However, since then the daily toll, while remaining high, has not surpassed that number. Daily new cases have also leveled off.

“The slowing in the pace of growth is an extremely positive factor, and in some regions, I believe we are close to the drop-off point of the curve, therefore the peak may be reached this week and then fall away,” Guerra said.

Guerra also told the radio station that the effect of Italy’s nationwide lockdown – which began on March 9 and was tightened in the following days – could soon be reflected in the number of cases.

“I believe that this week and the first days of the next will be decisive because they will be moments in which the government’s measures of 15 to 20 days ago should find an effect.”

US hospitals prepare to use blood plasma as treatment

US hospitals are gearing up to test a century-old treatment used to fight off flu and measles outbreaks in the days before vaccines, and tried more recently against Ebola and severe acute respiratory syndrome (SARS). This treatment might also work for COVID-19.

The US Food and Drug Administration said it is expediting approving the use of recovered patients’ plasma to treat the newly infected.

When a person gets infected by a particular virus, the body starts making specially designed proteins called antibodies to fight the infection. After the person recovers, those antibodies float in survivors’ blood – specifically in the plasma, the liquid part of blood – for months, even years. 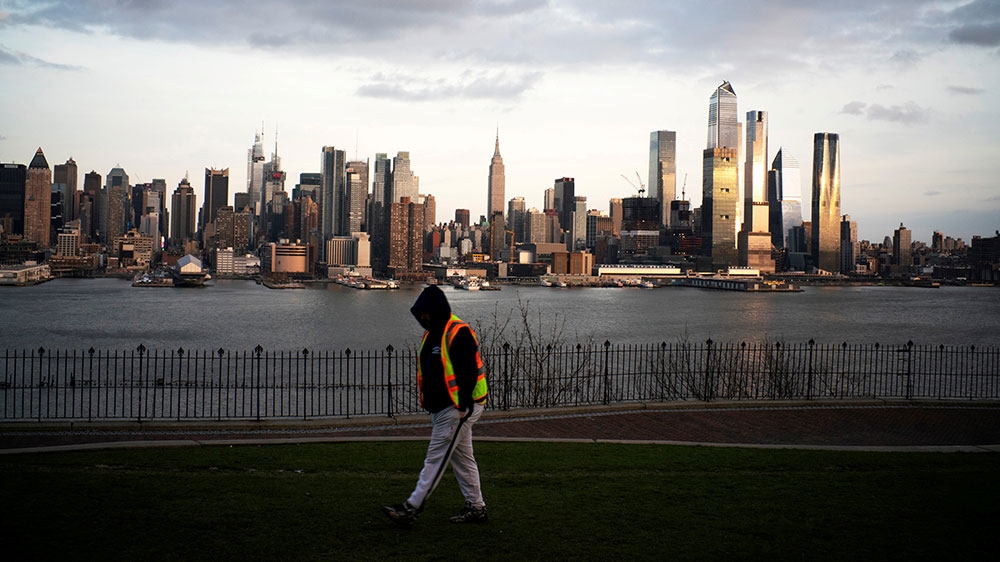 Injecting the plasma into another infected patient could boost the body’s ability to fight the infection, lessening the severity of the disease and freeing up hospital resources.

“Every patient that we can keep out of the ICU [intensive care unit] is a huge logistical victory because there are traffic jams in hospitals,” Michael Joyner, an anesthesiologist and physiologist at the Mayo Clinic in Rochester, Minnesota, told Nature scientific journal.

“We need to get this on board as soon as possible, and pray that a surge doesn’t overwhelm places like New York and the West Coast.”

Doctors in China attempted the first COVID-19 treatments using donated plasma from survivors of the new virus, but studies done there have only yielded preliminary results.

Cuba has dispatched a brigade of doctors and nurses to Italy to aid in the fight against coronavirus, following a request from the worst-affected Lombardy region.

While the UN has called on international cooperation to battle the pandemic, many countries have been forced to focus on their own populations, as healthcare systems across the world face supply and staffing shortages.

Cuba has sent its “armies of white robes” to disaster sites around the world since its 1959 revolution. However, the 52-strong brigade of medical personnel represents the first time Cuba has sent an emergency contingent to Italy, which has been brought to its knees by the pandemic, despite being one of the world’s richest countries.

“We are all afraid but we have a revolutionary duty to fulfill, so we take out fear and put it to one side,” Leonardo Fernandez, 68, an intensive care specialist, told Reuters news agency shortly before his brigade’s departure.

“He who says he is not afraid is a superhero, but we are not superheroes, we are revolutionary doctors,” he said.