India has reported almost 100,000 new coronavirus cases in the past 24 hours, a record jump for the country for a second consecutive day.

The latest number of new COVID-19 infections takes the total there to more than 4.65 million.

Only the United States has a higher figure, with more than 6.4 million, but the growth in infections in India is faster than anywhere else in the world. 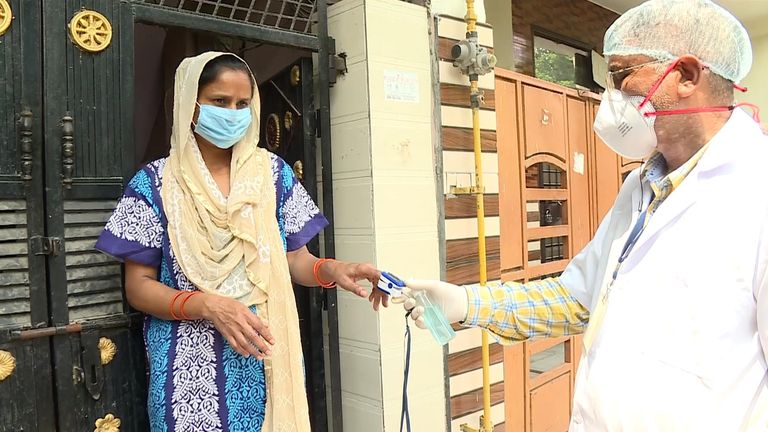 The western state of Maharashtra has been particularly hard-hit, with total confirmed cases of coronavirus passing one million late on Friday, the first place anywhere in the world to cross that mark.

If the state, which is India’s richest, were a country, it would rival Russia for the fourth highest number of cases globally.

Russia has now recorded 1,057,362 after a further 5,488 new infections were recorded on Saturday, with authorities saying a further 119 people have died, pushing the total number of deaths to 18,484.

Government officials and experts have claimed the increases in Maharashtra and elsewhere across the country are likely to be down to the economy re-starting, local festivals and lockdown fatigue.

“I am so disappointed with the pandemic situation in India,” said Bhramar Mukherjee, a professor of biostatistics and epidemiology at the University of Michigan, who has been tracking India’s COVID-19 situation closely.

In a tweet, she continued: “It is getting worse and worse each week, but a large part of the nation seems to have made the choice to ignore this crisis.”

Elsewhere, the Czech Republic reported its largest one-day rise of coronavirus cases so far, with 1,447 new infections. It is the biggest spike in infections among European countries in recent weeks.

The nation has tightened restrictions on face masks this week, although it aims to avoid a return to measures that would affect businesses.

Germany has also reported an increase, with a further 1,630 confirmed cases, bringing its total to 258,480.

Five more people have died with the virus, taking the country’s total to 9,347.

But it is a different story in Canada, which has reported zero deaths in the past 24 hours, for the first time since 15 March, according to public health agency data released late on Friday.

Antarctica remains the only continent without the disease.