Australian supermarkets have reintroduced a cap on toilet paper purchases after a rise in coronavirus cases sparked panic-buying for a second time.

Since reporting its first case of coronavirus in January, 104 people have died after contracting COVID-19 in Australia, while the number of cases is around 7,500.

When it first began to spread, photos and videos of shoppers panic-buying goods and toilet paper in supermarkets appeared on social media – scenes that would later follow in the UK. 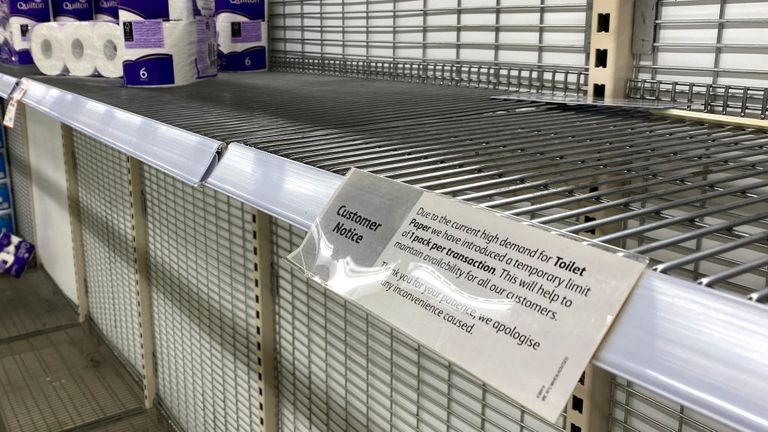 Now stores have been forced to once again implement a one pack per purchase rule, following a spike in COVID-19 cases in the southeastern state of Victoria.

Victoria reported 11 cases on Monday of this week, and 33 on Thursday.

The limit started off in just Victoria, but has since been expanded across the country in a bid to avoid similarly chaotic scenes to those seen earlier in the year.

Claire Peters, managing director of supermarkets at Woolworths, said in a statement: “We’ve regrettably started to see elevated demand for toilet roll move outside Victoria in the past 24 hours.

“While the demand is not at the same level as Victoria, we’re taking preventative action now to get ahead of any excessive buying this weekend.”

The company had ordered an extra 650,000 additional packs of toilet paper – 30% over its usual amount.