Asia’s biggest slum registers three cases, including one death, as authorities scramble to prevent spread of the virus. 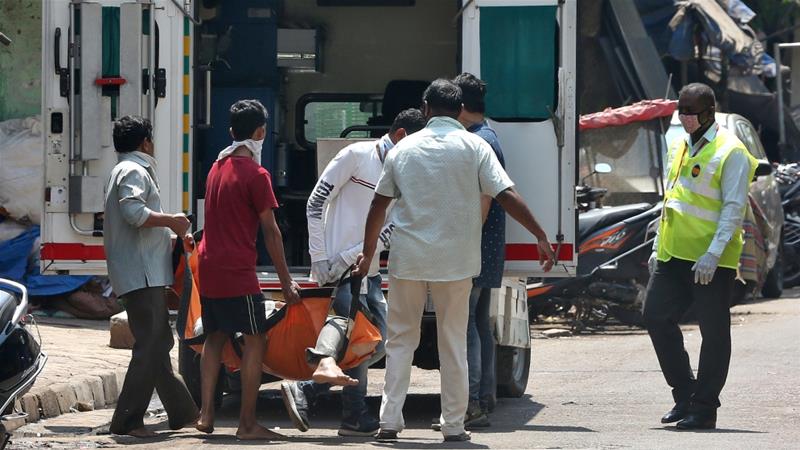 Authorities in Mumbai are concerned over the possible spread of the new coronavirus in the densely populated slum of Dharavi after a man with COVID-19 died and a doctor and municipal corporation worker tested positive.

The 56-year-old man who died on Wednesday night was the first to test positive from the sprawling shanty town in India’s financial hub.

The patient had no travel history and was admitted to a local hospital with a fever on Sunday and tested positive for the new coronavirus on Wednesday, an official of the Brihanmumbai Municipal Corporation (BMC) said.

Seven other residents of his house have been home quarantined and are being tested. “We will provide them food and water till their test results come back,” the official said.

Two people tested positive on Thursday – a 52-year-old BMC sanitisation worker posted in Dharavi and a 35-year-old doctor who practises near the slum, considered Asia’s biggest.

The 52-year-old man was admitted to an isolation ward. His family members and about two dozen colleagues have been asked to home quarantine, the BMC official said.

Public health experts say it would be difficult to contain the virus if it spread in a slum like Dharavi where eight to 10 people often share a room.

The population density is about 270,000 per square kilometre, making social distancing almost impossible. Water sources and sanitation facilities are shared by scores of people.

The Dharavi cases have raised concern that India may be experiencing community transmission of the disease despite a countrywide lockdown since March 25.

Thursday saw a jump of more than 300 cases with the total confirmed cases now at 1,965. Fifty people have died and 151 have been cured and discharged, according to the Health Ministry.

Meanwhile, efforts continued to trace all contacts of the estimated 2,000 people who attended a March 13-15 event at the Delhi headquarters of Tablighi Jamaat, a Muslim missionary movement, Health Ministry spokesman Lav Agarwal said.

Attendees had since moved across the country and at least 400 people had tested positive, according to reports from various states.

Agarwal said 9,000 people – members who attended the meeting and their primary contacts – had been traced and quarantined across the country.

Prime Minister Narendra Modi in a video conference on Thursday with chief ministers of states stressed that this was “just the beginning of the fight against the coronavirus”.

Modi told the chief ministers that in the next few weeks “testing, isolation and quarantine” should remain priorities. He also stressed an urgent need to increase the capacity of health care services by involving all retired health workers and volunteers from non-profit groups.

Health professionals have faced extreme shortages of protective gear such as gloves, masks and coveralls called personal protective equipment (PPE) – an issue raised by chief ministers in the meeting.

India went into a 21-day national lockdown from March 25, with 1.3 billion people told to stay at home in efforts to check the spread of the virus.

The move triggered the biggest exodus since the country’s partition in 1947, with hundreds of thousands of migrant workers fleeing cities for their homes.

On Friday, Prime Minister Modi urged Indians to switch off lights in their homes for nine minutes on Sunday night and light candles, lamps and even use mobile torches standing in their balconies.

In a video message, Modi said the gesture would dispel the darkness created by the coronavirus and show that people were together in their fight against the pandemic.