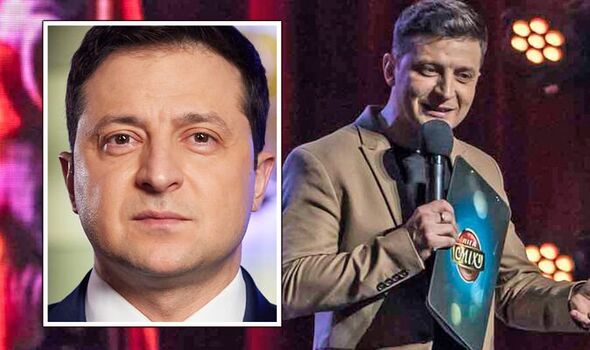 His courage has seen him continue to stand up to Russian aggression despite being massively outgunned. His humour and quick quips have pushed countries across the world to help him and his fellow countrymen and women in their fight for democracy.

“It’s ammunition I need, not a ride,” he told the American government when they offered to airlift him and his family out of Kyiv, the capital of Ukraine.

To Russian President Putin, he said: “When you attack us, you will see our faces, not our backs.”

Few thought the one-time member of Ukrainian comedy troupe Kvartal 95 and former winner of the country’s version of Strictly Come Dancing was going to waltz into a position of international importance.

But in refusing to leave Kyiv, the 44-year-old – who was also the voice of Paddington when the hit film was dubbed into Ukrainian – has emerged as the figurehead of his nation’s resistance.

Two days ago Mr Zelensky reportedly told EU leaders during a video call: “This might be the last time you see me alive.”

Born to Jewish parents in Russian-speaking south-east Ukraine, Mr Zelensky was best known for his four-year role as a high school teacher in the 2015 TV satire Servants Of The People.

His character becomes an unexpected political star after a video of him ranting against corruption goes viral, leading him to be elected as president.

In a strange case of fiction becoming fact, Mr Zelensky – married to screenwriter

Olena Zelenska, with who he has two children – then decided to form his own political party, named after his TV show.

Like his character, he ran on an anti-corruption ticket and trounced the pro-Russia incumbent by taking 73 per cent of the vote in 2019. It was an extraordinary outcome to a “joke” campaign that struck a chord with voters frustrated by poverty, corruption and a five-year war in the country’s east.

Despite his landslide victory, uncertainty remained about how he would lead Ukraine, and tackle its biggest threat – a bullying superpower on its border.

Since taking power in 2019, he has had to manage forces pulling his country in dramatically different directions.

On the one hand, Ukraine has been developing a relationship with the US, Nato and the EU. On the other, Russia and Putin have been desperate to stop the former Soviet state slipping further away.

All the while, he has been seeking to keep his countrymen and women calm, and displayed measured leadership in the face of growing challenges.

However in recent months, he has faced a collapse of the widespread support amid the biggest challenge of his premiership – the threat of a Russian invasion. In January, as warnings of Russian troops massing on the Ukrainian border grew louder, President Zelensky was filmed skiing at a resort belonging to his main backer – Ihor Kolomoyskyi, a fiercely anti-American billionaire oligarch.

Other close insiders held pro-Russian and anti-Western views, particularly his powerful chief of staff Andriy Yermak. Critics said it was through this inner circle that Russia fed the President with assurances they were not planning to attack.

This made him sceptical of the intelligence he received from Britain and America.

The impression grew that the inexperienced politician was out of his depth.

All that changed just before dawn on Thursday as the Russians invaded. President Zelensky appeared on television addressing first his own citizens and then the 144 million

Russians across the border. “Listen to the voice of reason,” he told them. “The Ukrainian people want peace.”

In the past 20 years, Ukraine has endured two significant uprisings – one that forced the rerun of a corrupt election. The second was the mass violent protests that drove the Kremlin-friendly president to flee in 2014.

Many Ukrainians had little confidence their President could ensure that stability.

But he has refused to leave Ukraine despite fears that Russian troops have orders to kill or capture him.

And last week, he emerged on the street with his aides, declaring in a video shot on a mobile: “Our troops are here, our citizens are here. All of us are here protecting the independence of our country.”

His bravery and his refusal to abandon his country to the Russian bear has seen him win respect nationally and internationally.

Ukraine may be the only country in the world with a comedian in charge, but Mr Zelensky is not playing this one for laughs.

Paying price for our appeasement

ALARM bells have been ringing loudly for years over the increasingly dangerous actions of Vladimir Putin. It’s just that the West refused to hear – or act – on them.

Ukrainians are now paying the price for the inaction and appeasement of generations of Western politicians.

Putin sent tanks into Georgia shortly after he was first elected in 2000. Thousands have died since. His forces have also been fighting Chechens in the North Caucasus for more than two decades now.

We have also witnessed how the dark arts of the Kremlin are deployed against those who try to stand up to him.

In 2004, while running to be President of Ukraine, Viktor Yushchenko fell ill after dining with the head of the country’s security services. It was later revealed he had been poisoned with dioxin, a deadly chemical found in Agent Orange. The impact of his poisoning was plain to see as his skin turned grey and pockmarked.

In August 2020, Russian opposition activist Alexei Navalny was poisoned with Novichok. He was into an induced coma but miraculously survived. Now he resides in a Russian prison cell while those behind the poisoning go unpunished.

In Britain, too, we have seen what can happen those who oppose Putin. Russian defector Alexander Litvinenko had specialised in fighting organised crime in the Russian Federal Security Service.

He fled to London after accusing his bosses of ordering the assassination of oligarch Boris Berezovsky.

In November 2006, after a meeting in a London pub, Litvinenko fell ill, his tea laced with polonium-210, a particularly nasty poison. During his slow, lingering death he accused Putin of poisoning him.

Even more shockingly, another “enemy” of the Kremlin, former Russian military intelligence officer Sergei Skripal, was poisoned with Novichok along with his daughter Yulia at his home outside Salisbury in March 2018. They survived but an entirely innocent woman, Dawn Sturgess, died when she sprayed herself with the nerve agent from a discarded perfume bottle.

There is no question in my mind that those actions were signed off by Putin himself, so we should all be aware of the lengths he is willing to go to silence those who have, in his mind, betrayed their homeland.

Over recent months, I have become increasingly concerned about the mental state of Putin, who will be 70 in October and has been in control of Russia for more than 20 years.

We had an excellent demonstration of his style of government when he hauled his security council chiefs in front of the cameras this week.

He lectured them from behind a desk while they sat before him like children in assembly, their faces frozen in terror.

Any hint of concern about their country’s situation was dismissed with brutal putdowns. History has taught us that autocratic leaders are in danger of becoming deranged tyrants whose grip on reality slowly slips away. Adolf remained convinced his forces would win Second World War even as Russian tanks closed in on his bunker.

Now, with Russian tanks rolling across Ukraine, nobody should be in any that Britain West are facing the gravest threat to freedom since the Second World War.

Neither should we doubt that this is the inevitable result of our spineless appeasement of a man who has murdered and bullied opponents and neighbouring states, and shamelessly meddled in the affairs of other sovereign nations – including our own.

Right now, the only way we can face this threat, short of military action, is to hit Russia with all the economic weapons at our disposal – including expulsion from the Swift banking system.

We must make it economically unviable for Putin to prosecute his illegal war.

His personal paranoias have led to a huge loss of life, a refugee crisis with potentially millions fleeing Ukraine and a conflict that threatens the stability of Europe.

He has to be stopped and we need a Churchillian figure to do that. Not just to use Churchillian words, but to act as Churchill did…