City says 1,290 more people died than previously reported amid questions about the credibility of China’s reporting. 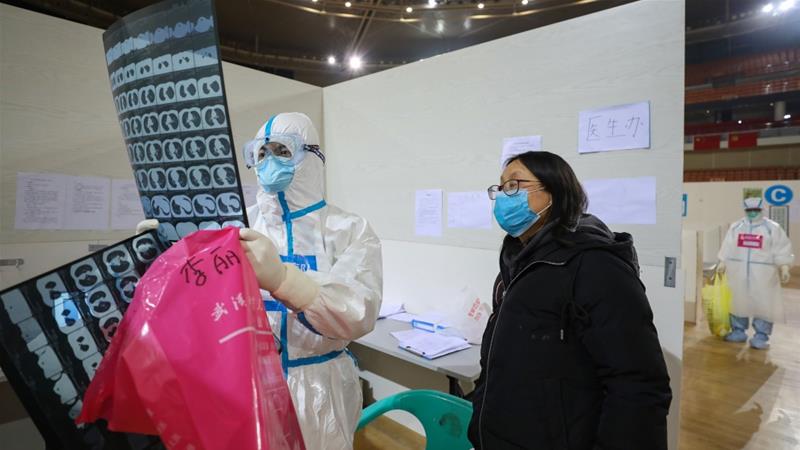 Chengdu, China – China’s central city of Wuhan, the first coronavirus-hit area, has revised its official death toll upward by 50 percent, raising more questions about the accuracy of its figures.

Wuhan added 1,290 fatalities to the previously reported 2,579 on Friday, bringing the total toll to 3,869 nationwide.

Foreign Ministry spokesman Zhao Lijian acknowledged the virus’s rapid spread contributed to undercounting that resulted in China raising its death toll, but added “there has never been any concealment, and we’ll never allow any concealment”.

In a statement issued by Wuhan’s COVID-19 prevention and control taskforce, health officials explained the sharp uptick was a result of a lack of medical resources at the beginning of the outbreak, with patients dying at home and falling out of the official data, and some victims treated in a vast network of medical facilities having not been properly reported.

Additionally, officials said the late and missed reporting during the mayhem of the peak of the outbreak in Wuhan in January also contributed to an undercount.

Laying out the efforts by the taskforce to track every COVID-19 death toll, the authorities said they worked to collect “full information from all epidemic-related locations”, including places such as “fever clinics, hospitals, makeshift hospitals, quarantine sites, communities with COVID-19 cases”, in addition to special sites such as “prisons, and detentions centres”.

Wuhan also revised its confirmed case tally to 50,333, an increase of 542 from the previous number. After the revision, the death rate among the infected in Wuhan reached 7.7 percent.

The adjustment came at a particularly troubling time for the Chinese government when the world is casting more doubt on China’s reported COVID-19 outbreak scale, as the fastest-growing economy in the world saw the first contraction of gross domestic profit (GDP) on record.

As the global pandemic has infected more than two million people and killed more than 146,000 worldwide, the index outbreak in China has reported relatively diminutive total deaths and confirmed cases, especially compared with other big outbreak hubs, such as Italy and the United States.

That has attracted a growing sense of mistrust towards China’s reported scale among the international community.

US President Donald Trump said on April 2 he believed the number reported from China “seem[ed] to be a little bit on the light side,” likely due to a classified intelligence community report that, as reported by Bloomberg, suggested that China was concealing the extent of the outbreak in the country and under-reporting both total cases and deaths it has suffered as a result of the disease.

Other state leaders joined Donald Trump in challenging China’s reported scale of the outbreak. Both the United Kingdom and France have said the number was untrustworthy, and French President Emmanuel Macron even said in an interview with Financial Times that it was “naive” to believe China had handled the pandemic so well.

Even within China, where speculation towards the government is heavily censored, there had been a growing sense of mistrust towards the officially reported number.

“So many medics were sent to Wuhan and you see the horrible footage coming out of the city, and now you’re telling me there were only 2,000-ish deaths? It can’t be!” a Chengdu resident, who did not want to be named for fear of repercussions, said.

The Chinese government’s credibility was further dampened by a damning report by The Associated Press news agency that said China’s central leadership had been aware of the risk of the emergence of a widespread outbreak for six days before the information was released to the public in January.

In an apparent response to speculation over China’s alleged cover-up or manipulation, the statement from the taskforce said the “timely revision” is a “response to public concerns and more importantly, a respect for every single life”.

“The adjustment shows that malicious manipulation never has soil in China – some people conjectured that the government had covered up the real number,” Hu Xijin, the editor in chief of Global Times, a state-sponsored English tabloid, wrote on Weibo, a popular social media platform.

“But in China, to come up with a lie that encompasses such a large scale of crisis isn’t possible.”

This narrative has also been echoed by a number of social media users in China who desperately needed a sense of transparency in a misty news environment in China. Many Weibo users flocked to the social media platform and posted that acknowledging the dead is a necessary step the government needed to take to memorise those affected by the disease.

However, some people are suspicious of China’s decision to adjust the data at this point in time, saying the revision wasn’t “timely” instead, it was a “last resort”.

“It’s very interesting to understand why Wuhan decided to revise the number now,” a Wuhan local told Al Jazeera on condition of anonymity for fear of retribution.

“Probably the government never expected this to grow into a pandemic, and looking at other countries’ statistics, the government is realising it can’t continue making up numbers anymore.”

For people who have lost their loved ones to the virus, however, the quarrel over the official number seems too distant yet too personal at the same time.

“My grandfather died on the way to the hospital and I don’t know if his death was calculated,” K, a Wuhan resident who asked to be only identified by the first letter of his last name, told Al Jazeera.

“As much as the government wants to say this is its way of paying respect to the dead, my grandfather wouldn’t have died if they did a better job earlier.”

He said he still holds a grudge against the government and that can never be changed.

“They adjusted the number, which is long-expected, but also the government needs to make sure actual work goes into better governance to make sure such tragedies don’t happen again.”

China: Truth In A Pandemic