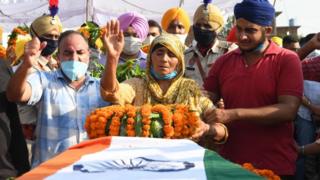 China has freed 10 Indian soldiers following a deadly clash between the two sides on Monday, according to Indian media reports.

The Indian government has not confirmed the news, nor confirmed that any of its troops were missing.

The fight in the Galwan Valley left at least 20 Indian soldiers dead and raised tensions between the two powers.

China did not acknowledge any casualties among its forces, while at least 76 Indian soldiers were injured. Both sides accused the other of an incursion.

The border between the two nations in the region is poorly demarcated and can shift with topographical changes.

According to Shiv Aroor, a senior editor at India Today, the release of the Indian troops formed a key point of negotiations between the two sides on Wednesday.

The news comes after an image emerged on Thursday of the crude weapons reportedly used in the fight.

The photograph, which appears to show iron rods studded with nails, was passed to the BBC by a senior Indian military official on the India-China border, who said the weapons had been used by the Chinese.

Defence analyst Ajai Shukla, who first tweeted the image, described the use of such weapons as “barbarism”. The absence of firearms in the clash dates back to a 1996 agreement between the two sides that guns and explosives be prohibited along the disputed stretch of the border, to deter escalation.

The image was widely shared on Twitter in India, prompting outrage from many social media users. Neither Chinese or Indian officials have commented on it.

Media reports said troops clashed on ridges at a height of nearly 4,300m (14,000 ft) on steep terrain, with some soldiers falling into the fast-flowing Galwan river in sub-zero temperatures.

The two sides have brawled along the disputed border in recent weeks, but Monday’s clash was the first to lead to fatalities in at least 45 years. Unconfirmed reports in Indian media said at least 40 Chinese soldiers died, but China is yet to issue any information about casualties.

Indian officials said all of their soldiers involved in the clash have been accounted for, following reports some were missing.

China on Wednesday claimed “sovereignty over the Galwan Valley region” – a claim rebutted by India as “exaggerated and untenable”.

Members of the public in both nations have since staged protests over the clashes in the disputed Himalayan border area, while officials have spoken cautiously and moved towards a diplomatic resolution.

Indian foreign ministry spokesperson Anurag Srivastava said the foreign ministers of both countries had phone conversation on Wednesday on the developments and “agreed that the overall situation should be handled in a responsible manner”.

“Making exaggerated and untenable claims is contrary to this understanding,” Mr Srivastava was quoted as saying by Press Trust of India news agency.

An Indian government statement after Subrahmanyam Jaishankar’s conversation with China’s Wang Yi said Chinese forces tried to erect a structure on the Indian side of the de facto border, the Line of Actual Control (LAC).

The statement accused the Chinese of a “premeditated and planned action that was directly responsible for the resulting violence and casualties” and urged China to “take corrective steps”.

Meanwhile, a Chinese statement quoted Mr Wang as saying: “China again expresses strong protest to India and demands the Indian side launches a thorough investigation… and stop all provocative actions to ensure the same things do not happen again.”

Why were there no guns?

The Galwan river valley in Ladakh, with its harsh climate and high-altitude terrain, is close to Aksai Chin, a disputed area claimed by India but controlled by China.

This is not the first time the two nuclear-armed neighbours have fought without conventional firearms on the border. India and China have a history of face-offs and overlapping territorial claims along the more than 3,440km (2,100 mile), poorly drawn LAC separating the two sides.

The last firing on the border happened in 1975 when four Indian soldiers were killed in a remote pass in the north-eastern state of Arunachal Pradesh. The clash was variously described by former diplomats as an ambush and an accident. But no bullets have been fired since.

At the root of this is a 1996 bilateral agreement that says “neither side shall open fire… conduct blast operations or hunt with guns or explosives within two kilometres of the Line of Actual Control”.

But there have been other tense confrontations along the border in recent weeks. In May Indian and Chinese soldiers exchanged physical blows on the border at Pangong Lake, also in Ladakh, and in the north-eastern Indian state of Sikkim hundreds of miles to the east.

India has accused China of sending thousands of troops into Ladakh’s Galwan Valley and says China occupies 38,000 sq km (14,700 sq miles) of its territory. Several rounds of talks in the last three decades have failed to resolve the boundary disputes.