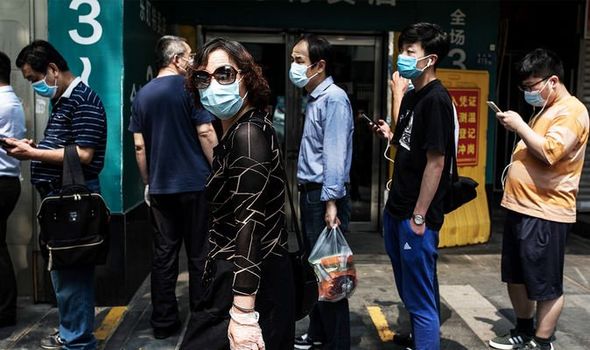 Beijing made the announcement on Wednesday following weeks of criticism over its handling of the epidemic. China’s ambassador to the United Nations Zhang Jun told reporters in Geneva investigators would be permitted to carry out work but only after the coronavirus crisis has come to an end. His announcement comes as the global death toll from the virus hits more than 3.7million.

China has rejected US President Donald Trump’s claim that the virus escaped from a lab in the city of Wuhan, where the illness was first detected late last year.

Mr Trump has said he has seen evidence to back up his claim.

Most of the earliest cases of coronavirus could be traced back to a wet market in Wuhan.

Wet markets in Asia are often lacking in basic hygiene and sanitation.

China has refused repeated requests by the World Health Organisation (WHO) to take part in investigations into the origins of COVID-19.

Dr Gauden Galea, the WHO’s representative in China last week said the organisation has been kept in the dark about what Beijing is doing to find the source of the sickness.

Dr Galea said: “We know that some national investigation is happening but at this stage we have not been invited to join.

“WHO is making requests of the health commission and of the authorities.

“The origins of virus are very important, the animal-human interface is extremely important and needs to be studied.

“The priority is we need to know as much as possible to prevent the reoccurrence.”

This is a breaking news story. More to follow…