MEXICO CITY — Ricardo González Gutiérrez, the beloved Mexican clown known as Cepillín, who was watched by generations of children throughout Latin America, died on March 8 in Mexico City. He was 75.

The cause was cardiac arrest, said his son and fellow performer Ricardo González Guajardo, who added that his father had recently learned he had cancer.

Known for his cherry-red nose and his black painted beard, Cepillín mixed physical comedy with song, dance and ventriloquism in performances on television as well as in the circus ring. His falsetto voice filled homes across Mexico, particularly to the tune of his ever-popular version of the traditional Mexican birthday song, “Las Mañanitas.”

In a half-century career, Cepillín hosted TV shows broadcast from Mexico, sold millions of copies of his albums of children’s songs, and later drew millions of viewers to his videos on TikTok and YouTube. And he toured Mexico and the United States with circus companies, including his own and the Ringling Brothers, performing for everyone from drug cartel capos to former President Enrique Peña Nieto of Mexico.

By his account, however, it was his work ethic and not his talent that made him a household name in the Spanish-speaking world, including among Latinos in the United States. 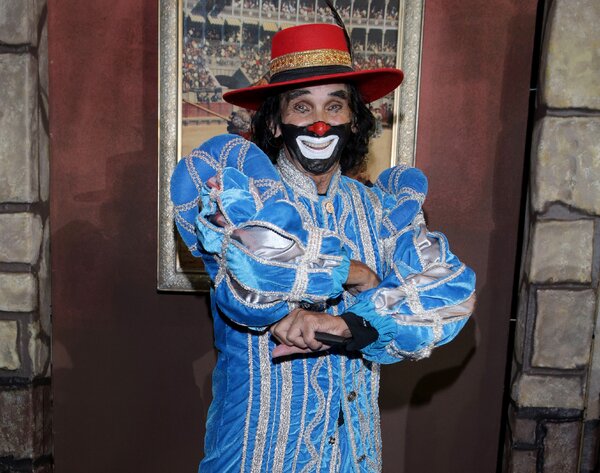 Ricardo González Gutiérrez was born on Feb. 7, 1946, in the northern city of Monterrey. He was the third child of seven brothers and sisters. His father, Rubén González Flores, managed a hardware store and worked as a radio presenter. His mother, Rebeca Gutiérrez de González, was a homemaker.

Mischievous and restless as a child, Cepillín had ambitions early on to be an artist, but his parents would have none of it. “In our house there was always a ‘no’, a ‘no’ for everything,” he told Mexico’s TV Azteca in an interview broadcast this month. “I was trampled.”

Pressured by his parents, Ricardo enrolled in the dentistry program at the Autonomous University of Nuevo León. It turned out to be the unintended doorway to his performing career. As a student he joined a television campaign to promote dental hygiene among children and came up with the idea of painting his face in clown makeup to make them less afraid of the dentist’s chair.

Encouraged by their reaction, he began using his clown persona off screen as well, and Cepillín was born. (The name comes from the Spanish word for toothbrush.)

In 1971, he was invited to host his own show for children on a local TV station. After marrying María Aydé Guajardo, he moved to Mexico City in 1977 and was hired by the national television channel Televisa to star in his own show. “El Show de Cepillín” ran for three years and was broadcast throughout Latin America.

That year he also recorded his first children’s album — one of more than a dozen he would make in his career, with themes ranging from disco to country music and always delivered in his trademark falsetto.

Cepillín went on to appear in shows on various local television stations in Mexico and toured internationally with circus companies, including his own, “El Circo de Cepillín.”

He performed in a stage version of “Aladdin” with the actress Salma Hayek years before she made it to Hollywood, and appeared in the 1979 film “Milagro en el Circo” (“Miracle at the Circus”), which featured the Mexican pop star Yuri.

Cepillín had three heart attacks, the first in 2005. His son Ricardo soon decided to take to the stage and created his own persona, Cepi, in homage to his father.

The next year, having recovered, Cepillín began performing with both Cepi and his other son, Roberto González Guajardo, known as Franky, on yet another TV show, “Cepillín Live,” which was broadcast in his hometown, Monterrey.

More recently, the younger Mr. González helped his father capture an audience of a newer generation, performing with him and Franky on social media and on YouTube and TikTok. Cepillín had more than 4.3 million followers on TikTok alone.

In addition to his sons, he is survived by his wife, of 48 years; his daughter, Aydé González Guajardo; his six siblings, Rubén, Jesús, Teresa, Rebeca, Ana and Gilberto; and four grandchildren.

In 2017, Cepillín was nominated for a Latin Grammy Award for best Latin children’s album.

“He thought it was really cool,” Ricardo González said. “He was very pleased that he continued to transcend into the present day.”