Brits ringing in the New Year were astonished to see glowing orange lights appear in the sky as the clock struck midnight.

The UFOs were spotted all over the nation, from Sunderland to Cambridge to Wales, sparking anxious theories that 2021 could be even more apocalyptic than last year.

Popular stargazing Twitter account @VirtualAstro posted the following at 12:41am: "It appears quite a few of you saw a bright orange object flying over the UK a few minutes ago.

Before long Brits were chiming in to say they'd also seen something orange drift across the night sky, with reports of sightings coming from Hull, Leeds, Coventry, Norfolk and Devon among others.

"I saw this little orange light in the sky just gone midnight," one woman said.

"I thought maybe it was from the street lights but it just enters the video randomly! Then does some weird move and disappears."

She posted a short video showing a pinpoint of light moving rapidly in the air above some houses.

Another Twitter user said: "I was letting the dog out and the old aviator in me can never help but look up. Saw what looked like an orange light in the distance.

"It stood out as it’s rare to see orange in the sky at night so I just assumed somebody had let off a lantern."

One said: "I saw a bright orange light south of Streatham in London, def not a lantern it was moving too fast. Was odd enough for me to notice, wrong colour lights for a plane or helicopter."

Someone in Tankerton, Kent posted a photo of a glowing orange orb in the sky above their house, adding: "Really weird, quite slow and very bright, no flashing lights then literally slowed right down for a few then fizzled out!"

A Birmingham user also posted a video of lights that appeared to be dancing in the sky.

The lights appear to have been sighted in Scotland and Wales as well.

"Saw a reddish/orange light in the sky hovering, move a bit left and right and then blink out from my window in Glasgow west end as well just a few mins after midnight!!" one woman said.

"Wild others had similar sightings!"

There were even tweets showing the glowing lights in the skies above Lora del Río in Spain and in an unknown location in the US.

In response to the Spanish video, a Welsh user posted: "Wait what people have been seeing these?? I saw two orange lights rising in the sky at the same time and thought they were lanterns also?! In South Wales, facing N/NW."

The reports even caught the attention of @ufo_stalker, a Twitter account that tracks strange extraterrestrial activity around the world based on the MUFON Case Management System.

"Orange light crossing the sky and ascending observed during NYE fireworks," it noted.

Many people were spooked by the sightings, speculating the lights could be an "asteroid of death" or even "Armageddon".

Others joked that the lights represented the UK leaving the EU or Donald Trump being booted from the White House.

However the lights were likely nothing more sinister than lanterns. Sky lanterns originated in China but have become popular around the world, with thousands marking celebratory events such as birthdays and weddings by lighting the candle within and setting them free.

They're often released at the stroke of midnight on New Year's Eve (as well as during Chinese New Year in February) to bring good fortune in the year to come.

Paper lanterns are available on Amazon and Etsy, so it's likely there were more than a few sent flying around the UK — and the world — last night. 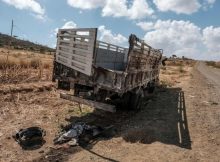