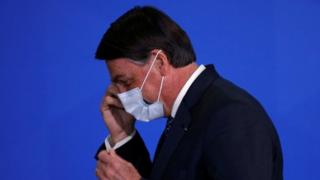 There is a question you will see over and over if you log on to Twitter in Brazil on Monday.

The question was originally directed by a reporter to President Jair Bolsonaro on Sunday.

The president responded by telling the journalist he “felt like covering your face in punches”.

The president’s reaction has prompted hundreds of thousands of Brazilians to take to social media to taunt Mr Bolsonaro with the very question which so angered him in the first place.

What’s this all about?

Fabrício Queiroz was an aide to President Bolsonaro’s eldest son, Flávio Bolsonaro, when the latter was a member of the legislative assembly of Rio de Janeiro state.

Mr Queiroz was arrested in June on suspicion of embezzling public funds and is currently under investigation for a series of deposits he made into a number of bank accounts amounting to a total of 1.2 million reais ($214,000; £164,000).

An investigation by the magazine Crusoe has since suggested that Mr Queiroz deposited 21 cheques worth 79,000 reais in total into the bank account of First Lady Michelle Bolsonaro between 2011 and 2016, before Mr Bolsonaro became president.

On Sunday, a group of reporters approached the president, who was on a visit to the cathedral in the capital, Brasilia.

A reporter for newspaper O Globo asked Mr Bolsonaro about the alleged deposits and was told by the president that he would not answer any questions, according to a report by O Globo.

When the reporter asked the president a second time why his wife had allegedly received 89,000 reais from Fabrício Queiroz, Mr Bolsonaro said: “I feel like covering your mouth in punches, yeah?”.

Asked by other journalists whether the utterance amounted to a threat against the journalist, Mr Bolsonaro did not respond.

What reaction has there been?

Groups representing journalists, including the Brazilian Press Association, have criticised Mr Bolsonaro for his reaction, which they said amounted to a threat.

But the condemnation of Mr Bolsonaro’s response was most visible on Twitter, where more than a million people tagged Mr Bolsonaro and tweeted the same question the O Globo reporter had asked.

The barrage of questions on Twitter started out as an online campaign by journalists but has since has had much wider uptake with celebrities and opposition politicians among many others joining in.

Among those who have tweeted are Brazilian composer Caetano Veloso, comedian Danilo Gentili, actress Bruna Marquezine and singer Anitta.

President Bolsonaro has a long-standing row with journalists who have been critical of his administration.

In a previous outburst against the press last year, he threatened to cancel the license of Brazil’s largest TV network, Globo.

He has in the past been particularly angered when he felt that his family came under attack.

In May, a video showed President Jair Bolsonaro using foul language to express his frustration when he felt unable to change security officials. 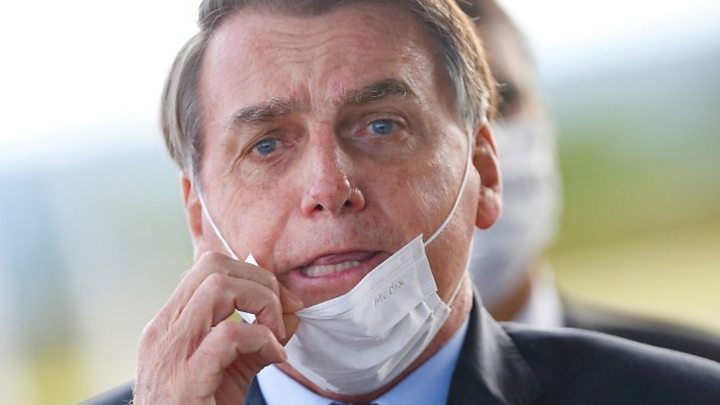