The former mayor of NYC will inject funds in the key electoral college state so Biden can spend elsewhere, aide says. 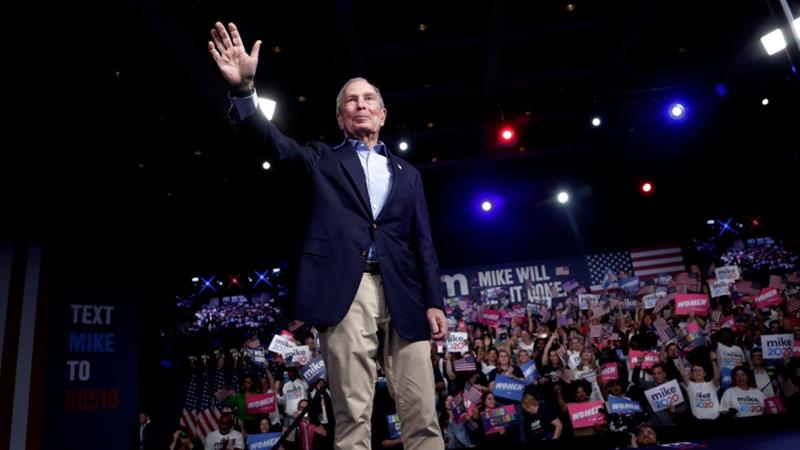 The spending revelation from the former mayor of New York City comes as Trump’s significant funding advantage over Biden has dried up amid reports of free-spending early on in the campaign.

“Mike Bloomberg is committed to helping defeat Trump, and that is going to happen in the battleground states,” said Bloomberg adviser Kevin Sheekey, who said the spending “will mean Democrats and the Biden campaign can invest even more heavily in other key states like Pennsylvania, which will be critical to a Biden victory”.

Florida is considered one of the most important states to win in the November 3 general election, with its 29 electoral college votes seen as near essential in any path to victory for Trump, who lost the popular vote but won the electoral college four years ago.

Races in Florida have been close in recent presidential election cycles. Trump won the state by 1.2 percentage points in 2016. Recent polls show the president and Biden effectively tied in the state with 50 days until the election.

Florida is also considered one of the most expensive battleground states for campaigning. Last week, Trump said he would be willing to contribute his money to help his campaign if needed, as he did in 2016.

Trump’s re-election campaign and the Republican National Committee on Wednesday said they raised a combined $210m in August, falling far short of matching Biden’s record-breaking haul of $364.5m for the month.

Trump took to Twitter on Sunday to deride the funding from Bloomberg, who spent more than $1bn on his own campaign to be the Democratic nominee, but failed to get traction before dropping out in March and quickly endorsing Biden.

“I thought Mini Mike was through with Democrat politics,” Trump said on Twitter in reaction to the news. “Save NYC instead.”

Bloomberg’s spending is meant to help Biden before early voting starts in Florida on September 24. Most of the money will go to television and digital advertising, his adviser said.

After 37 years, Budweiser will sit out the Super Bowl.
Recent Posts
Copyright © 2021 miamiheatnation.com.
This website uses cookies to improve your user experience and to provide you with advertisements that are relevant to your interests. By continuing to browse the site you are agreeing to our use of cookies.Ok