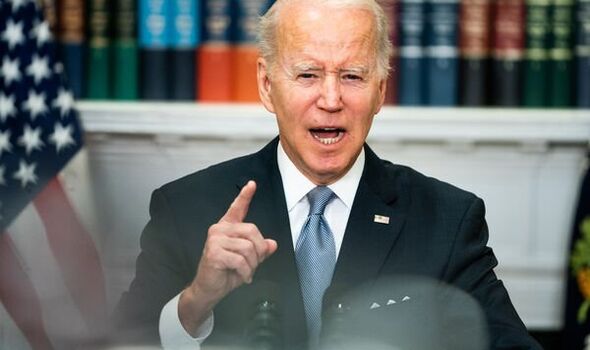 The US president unveiled a further £600million of support. It includes artillery, drones, howitzers and ammunition to help the country beat Moscow’s invaders.

Mr Biden also announced a ban on all Russian-affiliated ships from US ports.

The president described the battle for Ukraine’s capital Kyiv as a “historic victory” for Ukrainians, saying it was now vital to ramp up military aid for the country.

In Kyiv, Spain’s Pedro Sanchez and Denmark’s Mette Frederiksen became the latest leaders to show support with a visit as they met Ukrainian president Volodymyr Zelensky.

The Kremlin’s new goal is the capture of the Donbas, the mostly Russian-speaking eastern region that is home to coal mines and metal and heavy-equipment factories.

As the battle raged along a 300-mile front, the UK Ministry of Defence suggested Vladimir Putin was increasingly desperate to have something to show to his people at it’s Victory Day parade on May 9.

The MoD said: “This could affect how quickly and forcefully they attempt to conduct operations in the run-up to this date.”

But the Russian president yesterday ordered his forces not to storm the last remaining Ukrainian stronghold in besieged Mariupol.

Instead commanders were told to block the southern port, where Ukrainian forces are holed up in the Azovstal steel factory, “so that not even a fly comes through”.

But military commentators said leaving the factory in Ukrainian hands robs Moscow of the ability to declare complete victory in Mariupol, the capture of which has strategic and symbolic importance.

Its fall would deprive Ukraine of a vital port, complete a land bridge between Russia and the annexed Crimean peninsula and free up the invaders to move elsewhere in the Donbas. Ukrainian officials said four buses with civilians escaped from the city after several failed attempts.

Thousands more remain in Mariupol, much of which has been reduced to ruins in a nearly two-month siege, with more than 20,000 people feared dead.

Russian forces were yesterday advancing from staging areas toward Kramatorsk, which was hit by unrelenting rocket attacks.

And Luhansk governor Serhiy Haidai said the Russians were threatening the towns of Rubizhne and Popasna.

Meanwhile, Kyiv regional police revealed that two graves with nine shot civilians – some of whom showed signs of torture – were discovered in Borodyanka, north-west of the capital.

Head of the Kyiv regional police, Andriy Nebytov, said two women and a teenager were among those murdered.