If elected, Joe Biden and his allies are preparing to pass climate change legislation, piece by piece — knowing full well that the candidate’s $2 trillion plan would be a tough sell. 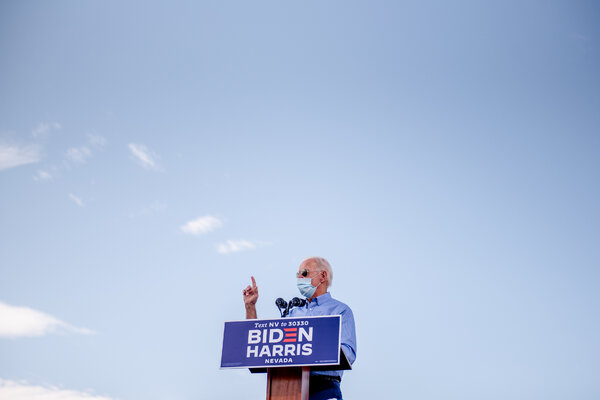 WASHINGTON — Joseph R. Biden Jr.’s $2 trillion plan to fight global warming is the most ambitious climate policy proposed by a leading presidential candidate, a political lightning rod spotlighted on Thursday night when the Democratic nominee acknowledged during a debate that it would “transition” the country “from the oil industry.”

But no one knows better than Mr. Biden, the former vice president, that it almost surely will not be enacted, even if his party secures the White House and the Senate. Thirty-six years in the Senate and the searing experience of watching the Obama administration’s less ambitious climate plan die a decade ago have taught him the art of the possible.

Still, a President Biden could have real impact: solar panels and wind turbines spread across the country’s mountains and prairies, electric charging stations nearly as ubiquitous as gas stations and a gradual decrease in the nation’s planet-warming greenhouse pollution.

“The oil industry pollutes significantly,” Mr. Biden said at the final presidential debate, adding, “it has to be replaced by renewable energy over time.”

Mr. Biden’s advisers insist that climate change is not just a political slogan. And on Capitol Hill, his team is already strategizing with Democratic leaders on how they can realistically turn at least some of those proposals into law.

“There are three things we have to do — climate, economic equality and democracy,” said Senator Chuck Schumer, Democrat of New York, who would become the majority leader if his party wins control of the Senate. “All three are vital, and climate is not going to be the caboose.”

If Mr. Biden wins, he will face a dilemma he knows well — so much to do, and so little time. As a newly inaugurated vice president, he and Barack Obama dove first into passing an economic recovery bill in the wake of the 2008 financial crisis, then focused on the Affordable Care Act. By the time Congress moved to climate change, the White House’s political capital was exhausted

Speaker Nancy Pelosi in 2010 forced the House to approve complicated legislation to cap carbon emissions, but that “cap and trade” bill never even came to a vote in the Senate. Its passage in the House helped sweep Democrats from power months later.

“The biggest factor in not getting climate change done in 2010 was health care,” said Phil Schiliro, who was Mr. Obama’s liaison to Congress at the time. “And this could happen again, with the other things that have to come first. The coronavirus is such an enormous wild card.”