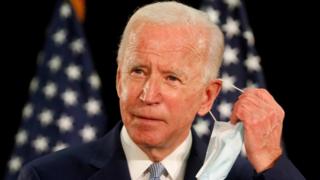 He said on Twitter that he had secured the 1,991 delegates needed and would fight to “win the battle for the soul of the nation”.

He had been the effective nominee since Bernie Sanders withdrew in April.

Coronavirus – and its effect on the economy – and the recent civil unrest are sure to dominate the election.

He then dominated the so-called Super Tuesday contests, taking 10 of the 14 states.

Mr Biden said: “It was an honour to compete alongside one of the most talented groups of candidates the Democratic party has ever fielded and I am proud to say that we are going into this general election a united party.”

Mr Biden, 77, secured the nomination officially after seven states and the District of Columbia held presidential primaries on Tuesday.

It is his third bid for the presidency.

Associated Press puts his tally at 1,995 delegates, with eight states and three US territories still to vote.

Mr Obama endorsed Mr Biden in April, saying in a video that Mr Biden had “all the qualities we need in a president right now”.

Mr Trump has indicated he is eager to take the fight to Mr Biden who he derides as “Sleepy Joe”, and the Democrat has faced a number of difficulties.

He was forced into damage limitation mode after saying African Americans “ain’t black” if they even considered voting for President Trump, later apologising for the “cavalier” comment.

Mr Biden has also faced accusations of inappropriate contact with women. He has described himself as a “tactile politician” and apologised for how people might react. Former staff assistant Tara Reade has accused him of sexually assaulting her in 1993, which he denies.

The US is facing major civil unrest over the death of an unarmed African American man, George Floyd, in police custody, at the same time as unemployment has reached levels unseen since the Great Depression amid the coronavirus outbreak.

Mr Trump and Mr Biden have already clashed on these issues, which look set to dominate the polls in November.