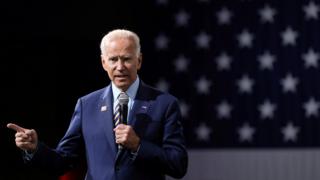 “I’m saying unequivocally: it never, never happened,” he said of the allegations during a TV interview on Friday.

He asked for a search of the Senate archives for any record of a complaint Ms Reade allegedly filed at the time.

Ms Reade made a criminal complaint to police last month.

She said she was a victim of sexual assault without naming Mr Biden. The police complaint, she said, was filed “for safety reasons only” as the statute of limitations for her claim had expired.

Mr Biden is running against Republican incumbent President Donald Trump, who has been accused of sexual misconduct by some 25 women.

The Democrat put out his statement before speaking on Morning Joe, a show on US cable channel MSNBC.

What are Reade’s accusations?

She was working as a staff assistant to Mr Biden from 1992-93, when he was a senator for the US state of Delaware.

Ms Reade, now 56, says that in 1993 he forced her up against a wall in the halls of Congress, and put his hands under her shirt and skirt, penetrating her with a finger.

“I remember him saying, first, as he was doing it ‘Do you want to go somewhere else?’ and then him saying to me, when I pulled away… he said ‘Come on man, I heard you liked me,'” she told podcast host Katie Halper in March. “That phrase stayed with me.”

Ms Reade says records of Mr Biden’s 36-year career as a US senator will contain evidence that she complained to her superiors about him.

The records are being held at the University of Delaware, which has said it will not release any papers until two years after Mr Biden leaves public life.

It appears there were no witnesses to the alleged assault but three people have backed Ms Reade’s account.

Her brother, a former neighbour and a former colleague have all said that they heard her give it shortly after the alleged incident.

Former neighbour Lynda LaCasse told Business Insider: “This happened, and I know it did because I remember talking about it.”

Ms Reade is one of more than half a dozen women who have forward over the last year to accuse him of inappropriate touching, hugging or kissing, though none described his actions as sexual assault at the time.

What did Biden say?

“It did not happen. Period,” he said.

Brezezinski pressed Mr Biden on his former statements suggesting that women should be believed when coming forward with their stories of sexual violence.

In 2018, when now-Supreme Court Justice Brett Kavanaugh was accused of sexual assault by Christine Blasey Ford, Mr Biden was joined by a chorus of top Democrats in supporting Dr Ford’s claims, and insisting that she be heard.

“For a woman to come forward in the glaring light of focus, nationally, you’ve got to start off with the presumption that at least the essence of what she’s talking about is real, whether or not she forgets the facts, whether or not it’s been made worse or better over time,” Mr Biden told reporters at the time.

“Are women to be believed unless it pertains to you?” Brezezinski asked Mr Biden on Friday.

“Women are to be believed, given the benefit of the doubt,” Mr Biden said. “Then you have to look at the circumstances and the facts.”

Mr Biden refused to speculate on Ms Reade’s motives, saying she had a right to come forward “and say whatever she wants to say. But I have a right to say: ‘Look at the facts.'”

But the former vice-president would not move to open his files at the University of Delaware for a search of documents pertaining to Ms Reade. Despite repeated questioning from Brezezinski, Mr Biden insisted those 1,800 boxes of documents did not contain any personnel files and would be used as political “fodder” for his ongoing presidential campaign.

Some Republicans are seizing on the Reade allegations to portray the Democrats as hypocrites who only defend women who allege wrongdoing against conservatives, the Associated Press reports.

But given the long-standing allegations against Donald Trump, a man who once boasted of grabbing women by the genitals, the Republican camp may struggle to make political capital from Mr Biden’s troubles.

At the same time, the Democrats have set themselves up as the party of moral purity, on gender as well as race. The party’s politicians are inevitably held to a different standard.

And women are a core constituency for the party, traditionally giving more votes to Democratic candidates than Republicans.