Belgium’s government is facing increasing pressure as hundreds of migrants continue a hunger strike that has lasted more than a month.

This week, some participants stitched their mouths shut and are only accepting small amounts of liquids through straws, others are unable to stand up because they have become too weak.

The strike started in May in two universities and a Brussels church by migrants trying to obtain legal residency papers to continue to live in the country, where some say they have been working and living for a decade.

Without official documentation, they are unable to access benefits granted to Belgium residents, such as healthcare. Estimates of the number of migrants taking part in the protest are as high as 400 – but migrant and asylum secretary of state Sammy Mahdi has said the figure is around 200.

Red Cross health workers have been offering assistance at the ULB university in Brussels, where migrants are striking.

One Nepalese migrant taking part in the hunger strike, Kiran Adhikeri, said: “I cannot explain in a word how I’m feeling.

“I am begging to them, please give us access to work, like others. I want to pay the tax, I want to rise up my kids here, in this modern city.

“We need our dignity, identity of our work and the fundamental rights of our children.

“Every night I sleep with the depression and the frustration, every morning I wake up with the hope.”

Despite seeking to improve the application system for people wanting to stay in Belgium, Mr Mahdi has said demands by hunger strikers to have their individual cases handled is not the way to deal with the problem.

He told Belgian TV network VRT: “They say that there are 150,000 living here illegally, and the 200 people that decide to stop eating should be regularised individually? What would be the result? 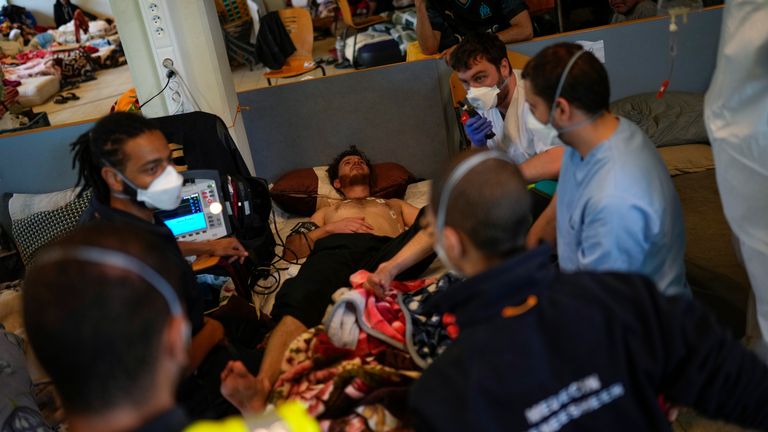 The French-speaking Socialist and Green coalition partners in government have called for a more flexible approach that could give the hunger strikers a better shot at obtaining the necessary papers.

Tensions have been increasing among the seven coalition partners that have comprised the government since October over how to deal with the migrant situation.

Earlier this month, about 100 people staged a demonstration in support of the undocumented migrants, the Brussels Times reported.