BBC Weather: Wet and windy conditions to sweep across UK

The UK is set for yet more wind and rain as a band of low-pressure batters the western fringes of the country. BBC Breakfast weather forecaster Sarah Keith-Lucas warned Britons to grab their raincoats as rain will fall for most of the UK on Sunday with patches of sunshine breaking through at times. Temperatures will remain in the low to mid-teens across most of the UK on Sunday. Monday will be more of the same but the Bank Holiday weekend is set to see temperatures rocket to 19C degrees in some areas.

The BBC Weather forecaster said: “We have got some more rain on the cards today but it’s not a write off particularly if you live in the east.

“There is rain on the way, it is working its way slowly west across the UK through the course of the day.”

But she warned: “It is not only going to turn wetter it will turn windier later on as well.

“Rain has already arrived across parts of Northern Ireland, a few showers pushing into western fringes of Britain as well.” 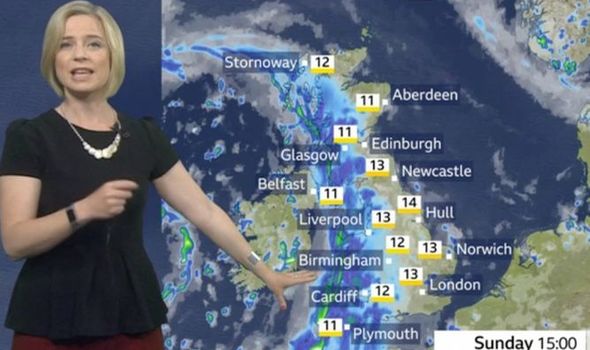 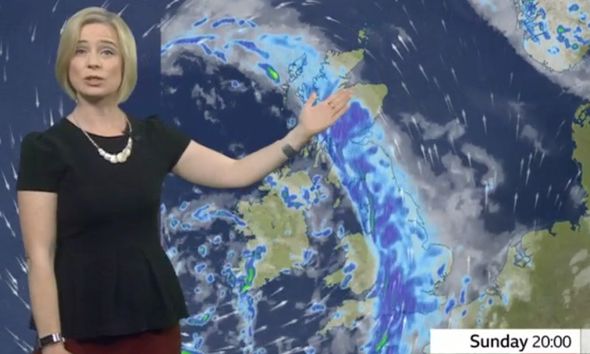 Ms Keith-Lucas said: “There will be some dry, brighter weather lasts for a good part of the day for the likes of eastern Scotland right down to east Anglia.

“Some heavy showers for Northern Ireland later in the afternoon.”

She warned: “Into this evening that rain eventually arrives across eastern parts of England, eastern Scotland as well.” 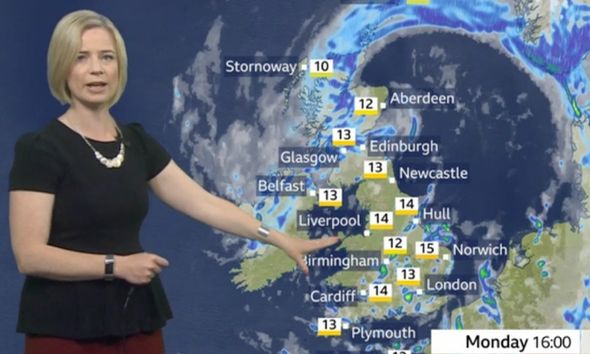 The weather forecaster went on to say: “Further heavy showers developing tonight towards the west, there could be the odd rumble of thunder as the main rain band pushes its way northwards and eastwards.

“Quite a chilly night for the time of year but it won’t be quite as cold as it was last night.”

The presenter said: “A day of sunshine and showers for most areas, a little bit more persistent rain or northern Scotland.” 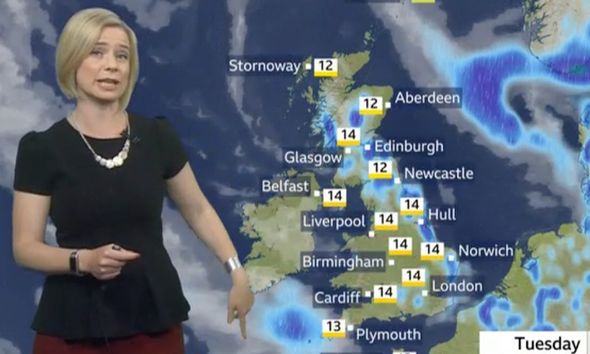 She added: “But showers will be heaviest through central and eastern parts of England.”

Top temperatures on Monday will be 15C in Norwich, 14C in Cardiff, 14C in London, 13C in Newcastle, and 12C in Aberdeen.

Tuesday will be yet another day of sunshine and showers but temperatures will linger around 14C degrees across the UK.

She concluded for the rest of the week, “eventually things are going to turn a little bit drier and warmer from Wednesday onwards” adding the UK “could see 20 degrees by the Bank Holiday weekend.”